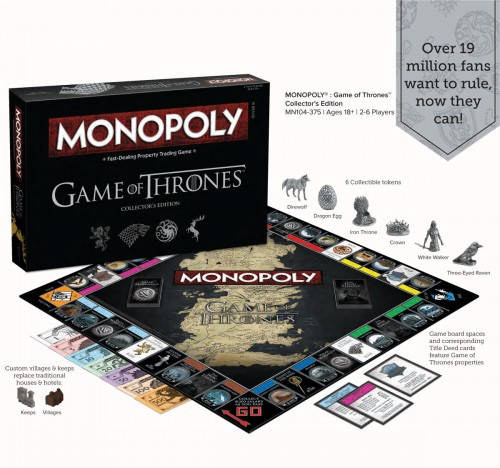 Get ready to battle for the Iron Throne in Game of Thrones Monopoly. It’s the classic game of buying and selling properties with a Westeros makeover.

This game features infamous locations from the hit television show, based on the popular A Song of Ice and Fire book series. The locations include Castle Black, Winterfell, and King’s Landing! You will buy, sell, and trade your way to sit atop the Iron Throne!

It comes with 6 collectible tokens, including a dragon egg, the three-eyed raven, a White Walker, a Direwolf, a crown, and The Iron Throne itself. Villages and Keeps replace Houses and Hotels. This is going to be fun for Game of Thrones fans and Monopoly fans alike. Only $59.99 from Entertainment Earth. Pre-order it now for June. Also at the HBO Store.

This Game of Thrones 3 Eyed Raven Plush will look great on your shelf or couch and you may even see him in your dreams like Brandon Stark. He looks great and slightly menacing. Because he has wired legs, you can pose him however you […]

This Game Of Thrones Dragon Egg Flash Drive may not hatch to reveal a dragon, but it will hold your data. It looks just like a dragon egg, but this egg has a removable, ultra-fast, ultra-thin, waterproof USB flash drive. It also features a pull-out […]