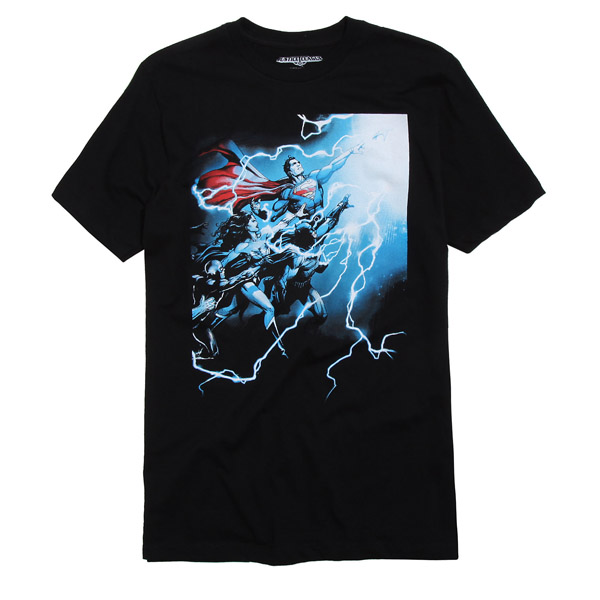 What’s newer than DC Comics’ New 52? That would be Rebirth, and the DC Universe Rebirth #1 Cover T-Shirt lets you wear the attempt that DC is making to fix everything that got screwed up when they tried to fix everything with the New 52.

So DC Comics realized they messed up with The New 52 and decided to make even more changes, hoping to salvage the good parts of the New 52 and stick them in the pre-Flashpoint universe. It’s still too soon to tell if the plan will work or if they will jump the rails yet again.

On the bright side, though, we have this cool bit of art created by artist Gary Frank, featuring the iconic heroes of the DC Universe reaching for the hand of… well, that would be telling and slightly spoilerish for anyone still on the fence about trying the reboot. Let’s just say you might want to watch men when the surprising force behind the New 52 is revealed.

The DC Universe Rebirth #1 Cover T-Shirt is available for $16.72 at Hot Topic.

The Dark Knight is reborn with the DC Comics Rebirth Batman ArtFX+ Statue. With the New 52 now being a done deal, DC Comics has taken their iconic characters into DC Rebirth, bringing back forgotten heroes, introducing new heroes, and redesigning heroes who weren’t erased […]

Sometimes, it would be nice to know what the future has in store for us, and it would be great if we didn’t have to shell out money to go a carnival or arcade just to find out our fortune. Luckily, the Zoltar Fortune-Telling Game […]

The heroes of the DC universe have gone through another round of changes but the DC Comics Original Universe T-Shirt lets you remember the classics by wearing them on your chest. Remember when Superman wore his red undies on the outside, Green Arrow was rocking […]

The Dark Knight is ready to soar through the night with the Batman Rebirth Q-Fig. DC Rebirth has affected all the characters in the DC Universe to one degree or another, with Bruce Wayne and his masked alter-ego experiencing quite a few changes. It’s a […]

What happens when Superman, Batman, and Wonder Woman stop doing the superhero thing? Well, one thing that happens is the cool DC Comics 52 Week One Cover T-Shirt, featuring Wonder Woman’s sword thrust through the cape of Superman, while Batman’s cape and cowl covers the […]

Action Comics #1 was where it all started. It was the first appearance of Superman. Every geek knows that classic cover featuring Superman lifting a car over his head. Now you can add this classic issue to your attire with these Superman Action Comics #1 […]

WHO or what are you dressing up as this year? The Doctor Who Her Universe TARDIS Tunic Tank is an easy fix if you’re a Doctor Who fan and want to wear something original and low-maintenance. In this dress, you instantly turn into a smokin’ hot […]