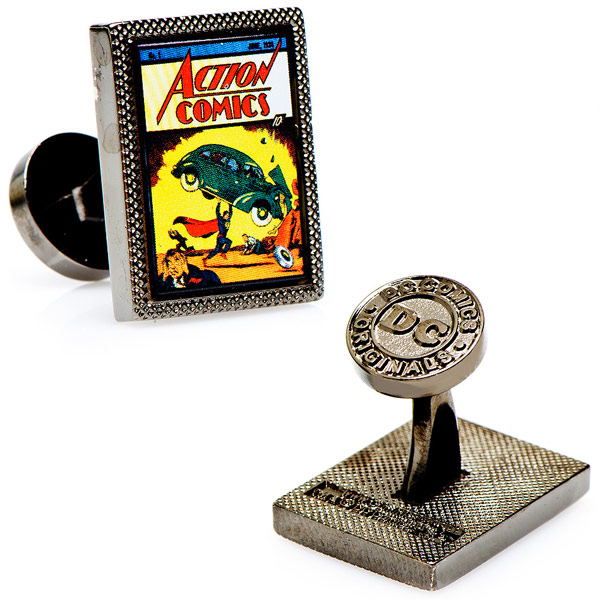 Action Comics #1 was where it all started. It was the first appearance of Superman. Every geek knows that classic cover featuring Superman lifting a car over his head. Now you can add this classic issue to your attire with these Superman Action Comics #1 Comic Book Cover Cufflinks.

They look great. Let Superman’s first issue comic book cover jazz up that suit. They measure 7/8 of an inch tall. There are no geekier cufflinks for DC Comics fans. 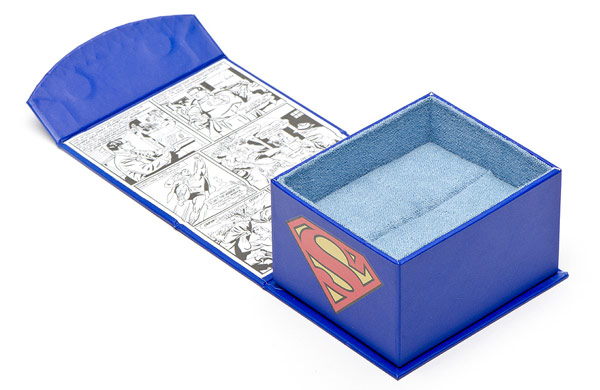 The Superman Action Comics #1 Cufflinks pay homage to the most sought after comic book of all time. Making its debut in April of 1938, Action Comics #1 is the birthplace of Superman. Nearly a century later, the love of the Man of Steel has not lost any momentum. Officially licensed by DC Comics, the exclusive cufflinks depict the iconic cover of Action Comics #1 and is set on a gun metal setting. With every detail thought out, the cufflinks feature a fixed backing featuring the DC Comics logo. Officially licensed by DC Comics.

Get them as a gift or treat yourself. This set is about $60 at Entertainment Earth, Amazon.com, and Cufflinks.com.

Superman’s cape has been very busy this past year. We’ve seen it on socks, glasses, backpacks, costume shirts and now these officially licensed Superman Cape Cufflinks. Will you be more powerful than a locomotive and able to leap tall buildings in a single bound just […]

Let the Man of Steel add some of his Kryptonian strength to your coin collection with the Superman Comic Book Cover Coins. Whether you like the Man of Steel as he first appeared in Action Comics #1 or prefer Supes’ New 52 look, there’s a […]

Remember those fun, cool and stylish USB flash drive cufflinks that we wrote about here at GeekAlerts a couple of months ago? Now you can get these fashionable storage accessories in three different colorful versions.

Remember the App Button Cufflinks from last week? Well if you love your cell phone, and not just specific apps, you’d probably prefer these iPhone / Smartphone Cufflinks. When you have to attend a formal event, you can still show your geeky side with techie […]

GeekAlerts has shown some pretty cool cufflinks in the past like: iPhone App Buttons, Facebook Like Dislike and even Remington 270 Win cufflinks.  If you are a true gun person, or from Texas, then you will love the real Colt .45 Cufflinks.  These cufflinks are […]

Are you still searching for that prefect Father’s Day gift? If so, you can’t go wrong with the R2-D2 USB Flash Drive Cufflinks. These cufflinks not only look like our favorite Star Wars droid (sorry C-3PO), but they also function as USB flash drives. The […]

Beer-drinking geeks aren’t just going to step out donning Budweiser cufflinks in their Sunday best. Instead, you might see one walking around with Beer Molecular Structure Cufflinks, which are more discreet, enigmatic and nerdy to the tenth power. Any chemist, biologist or engineer will automatically clue into what those very important […]