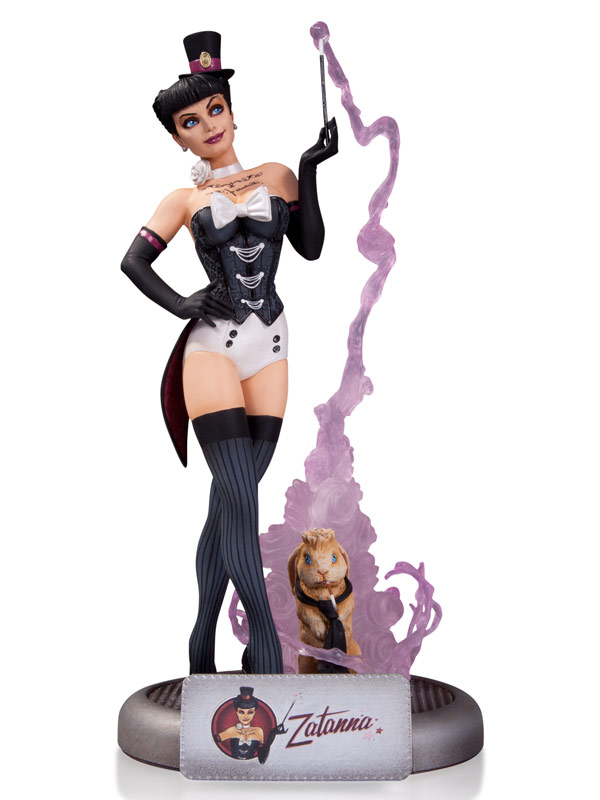 The Mistress of Magic gets a Pin-Up style makeover with the DC Comics Bombshells Zatanna Statue, which shows the witch still knows a thing or two about weaving spells, regardless of what era she’s representing.

With just a few minor modifications of her classic outfit, Zatanna fits right in with the popular Bombshells line, although unlike other statues such as Bombshell Supergirl and Bombshell Batgirl, she’s sharing the stage with another popular comic book character, John Constantine, who’s looking a little… different after Zatanna uses a transformation spell on him. I guess she’s not too upset because she turned him into a bunny instead of something like a bug or frog.

The DC Comics Bombshells Zatanna Statue will be available December 17, 2014, but it can be pre-ordered now for $124.95 at the WBshop.

The DC Comics Zatanna Bishoujo Statue gives us a look at the spell-weaving heroine of the DC Universe, with a sexy Bishoujo twist added. You might have seen the pin-up style DC Comics Bombshells Zatanna Statue but this one sticks with the present-day outfit worn […]

The man with the magic, and an angle to work, is ready to conjure a spell for you as the Arrow TV Series Constantine Action Figure. Based on Matt Ryan’s character on NBCs short-lived Constantine and The CW’s Arrow, this John Constantine action figure stands […]

The Hellblazer is looking to heat things up with the DC Comics Constantine Statue. Looks like there will be a hot time in the underworld tonight. He smokes. He drinks. He swears. He has no problem sacrificing you for the greater good. Constantine might not […]

Brace yourself because the Zatanna Art Print is getting ready to cast a spell on you. If you’re a fan of artist Stanley ‘ArtGerm’ Lau, you’ve probably admired the Gotham Sirens Poison Ivy Premium Art Print and the Batgirl Birds of Prey Premium Art Print. […]