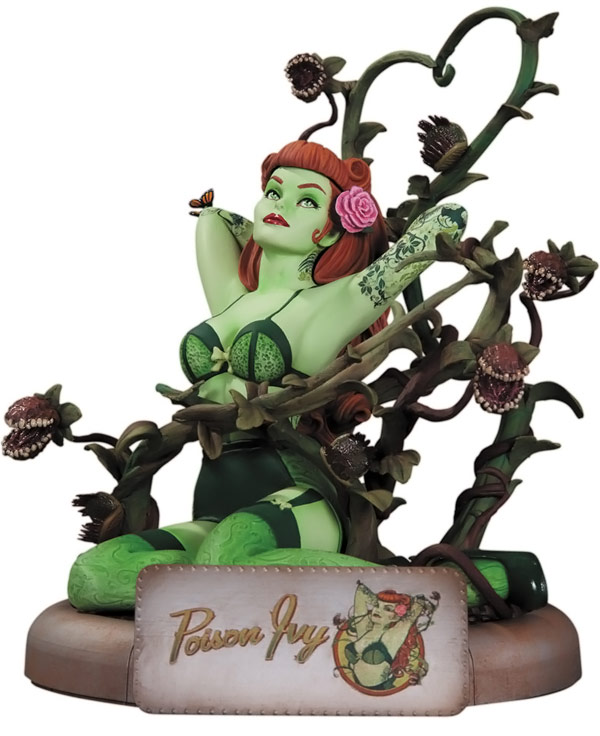 Some women can be described as having a poison personality, and that description has never been more accurate than when it’s applied to one of Batman’s sexiest and deadliest foes. The DC Comics Bombshells Poison Ivy Statue raises the temperature even higher by adding a 1940′s/1950′s pin-up style to her look.

The green-skinned villain is decked-out in emerald lingerie but she lets people know she has a strict ‘look but don’t touch’ rule in place that’s being enforced by an entourage of Venus fly traps that look eager to take a bite out of any admirer that gets too close.

Wonder Woman and Supergirl have also undergone a DC Comics Bombshell transformation but Ivy gets the distinct honor of being the first bad girl in the collection. The resin statue is approximately 7 1/4 inches-tall and includes a nameplate that features Poison Ivy’s name and a waist-length picture of her.

The DC Comics Bombshells Poison Ivy Statue is arriving September 2013 but it can be pre-ordered now for $99.99 at Entertainment Earth.

Open your beer in style with this DC Comics Bombshells Poison Ivy Credit Card Bottle Opener. It features Poison Ivy herself in bombshell form. It has the Bombshell version of Poison Ivy on one side looking sexy and a Poison Ivy logo on the back […]

This DC Bombshells Poison Ivy Satin Robe is perfect for fans of the deadly bombshell who need something nice to wear around the house. This robe is made of satin in Ivy’s signature color, green. It also features Ivy’s name and Ant Lucia’s pin-up style […]