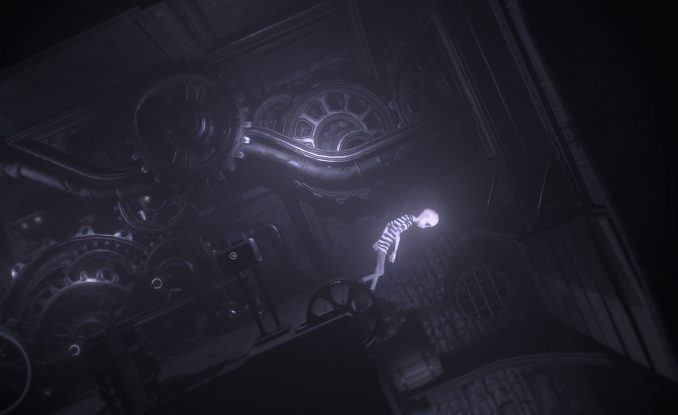 Check out the DARQ Release Announcement Trailer get a glimpse of this atmospheric horror adventure puzzle game that is coming to Steam on August 15, 2019.

It looks very cool, especially because of the unique game mechanics that allow the player to bend the laws of physics and manipulate the fluid fabric of the dream world. Besides the atmospheric graphics and innovative gameplay, sound and music are also very important to DARQ. In fact, the score was composed by the game director, Wlad Marhulets, who is a 5-time ASCAP Award-winning composer, and was recorded with the Budapest Symphony Orchestra.

DARQ tells the story of Lloyd, a boy who becomes aware of the fact that he is dreaming. To Lloyd’s misfortune, the dream quickly turns into a nightmare and all attempts to wake up end in failure. While exploring the darkest corners of his subconscious, Lloyd learns how to survive the nightmare by bending the laws of physics and manipulating the fluid fabric of the dream world.

Apart from gravity-defying puzzles, Lloyd will have to use stealth when around enemies. He has no chance of winning in an open confrontation, since the creatures he will encounter are much more powerful and faster than him. Instead, he has to rely on careful planning to avoid getting detected.

Jump scares in DARQ serve one purpose: they help establish that in a dream world anything can happen at any time. However, this isn’t a game that is all about jump scares. Quite the contrary, they rarely occur. DARQ is more about building tension and anticipation in between jump scares. Once the player knows that a jump scare could happen, they are more likely to stay on the edge of their seats for a very long time.

The game is designed to be a moving artistic experience. Elegance is the key word in DARQ’s art direction – it serves as a means of seduction, or an invitation for the player to step in and develop and emotional connection with the experience as they progress. The goal is to make the player like being there, even though being there involves facing their fears.

Music and sound play a very important role in the game. DARQ is a project started by 5-time ASCAP Award winning composer Wlad Marhulets, and since the very beginning the game was designed around music. The score is being written by the game director himself and will be recorded with Budapest Symphony Orchestra. Wlad’s music will be mixed by Adam Schmidt, a renowned sound engineer known for his work on Inception, The Dark Knight Rises, Pirates of the Caribbean, and others. Sound design is being done by Bjørn Jacobsen, known for his work on such games as Cyberpunk 2077, Hitman, and EVE: Valkyrie.

Leading manufacturer of Wi-Fi music players and internet radios, Grace Digital Audio, just released the all-new Mondo Wi-Fi Music Player. The Mondo is the recipient of a CES 2011 Design and Engineering Honoree Award and has great features like a 3.5” color LCD display, 5 […]

Want to learn how to program a computer? Lots of people do but those boring books can lull even the most dedicated students to sleep. However, you can make learning fun with the c-Jump Computer Programming Board Game. Give your intro to world of computer […]

The aptly named Dream Chair Chaise Lounge Chair is what happens when you combine a hammock and a pool-side lounger for the ultimate in comfort and relaxation. Patio loungers are nice, but you can’t gently swing in the breeze. Hammocks are relaxing, except for getting […]

Run faster! Jump higher! We all want to do it, which is why countless cartoons and TV shows have featured cool spring shoes that allow you to hop like a kangaroo. Although there have been other real versions of this spring loaded shoes idea over […]

Many gamers are excited for the upcoming release of Metro Exodus, a first-person shooter with stealth and survival horror elements that is the sequel to Metro: Last Light and Metro 2033. 4A Games, the developer, just released the Metro Exodus Weapons Trailer, so you can […]