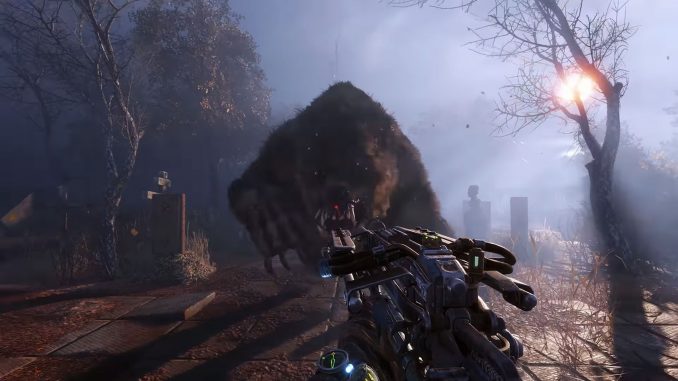 Many gamers are excited for the upcoming release of Metro Exodus, a first-person shooter with stealth and survival horror elements that is the sequel to Metro: Last Light and Metro 2033. 4A Games, the developer, just released the Metro Exodus Weapons Trailer, so you can see brand-new footage from the game showing the wide variety of weapons that will be at your disposal.

Metro Exodus will be released on February 15, 2019, for the PC, Xbox One, and PlayStation 4. They’ve already released a number of trailers and videos that we haven’t published yet on GeekAlerts, so you can see them below. They include the Story Mode Trailer, the Title Sequence, a “making of” video, and thorough coverage of the Spartan Collector’s Edition as well as the incredible Artyom Edition.

Watch the Metro Exodus – Weapons Trailer from 4A Games for coverage of the handguns, shotguns, rifles, and special weapons:

Packed with brand new footage and stunning tear-downs of the iconic hand-made guns of post-apocalyptic Russia, this trailer reveals the devastating arsenal of weapons used by Artyom and his band of Spartans as they journey across Russia.

Watch the Metro Exodus – Story Trailer from 4A Games to learn more about the post-apocalyptic science fiction story that is based on the internationally bestselling novel Metro 2035 by Dmitry Glukhovsky:

Narrated from the perspective of Anna, the Spartan Order’s top sniper and Artyom’s wife, the Story Trailer explores the hostile world of Metro Exodus that lies in wait for the crew of the Aurora as they flee the ruins of Moscow and embark on an epic year-long journey into the unknown. Artyom always believed that there was life beyond the Metro – now his hopes and dreams will be put to the ultimate test in the crucible of the Russian wastelands.

Metro Exodus is an epic, story-driven first person shooter from 4A Games that blends deadly combat and stealth with exploration and survival horror in one of the most immersive game worlds ever created. Flee the shattered ruins of dead Moscow and embark on an epic, continent-spanning journey across post-apocalyptic Russia in the greatest Metro adventure yet.

Explore the Russian wilderness in vast, non-linear levels and follow a thrilling story-line inspired by the novels of Dmitry Glukhovsky that spans an entire year through spring, summer and autumn to the depths of nuclear winter.

Learn more about the developers and company behind the game in The Making Of Metro Exodus – Episode One:

Introducing The Making of Metro Exodus – a three part documentary series filmed on location in Kyiv and Malta at 4A Games’ two studios as they put the finishing touches on the upcoming Metro Exodus.

Featuring interviews with key personnel at 4A Games, archive footage and photos, and never-seen-before materials from the 5 year development of Metro Exodus from the earliest concept stage, this series takes fans to the heart of the creative process behind 4A Games’ most ambitious project to date.

In Episode One we meet the team of ‘Spartans’ who founded 4A Games with one goal in mind – to rise from the rank of ‘underdogs’ and forge the studio that could bring Dmitry Glukhovsky’s series of Metro novel to life.

Check out the Metro Exodus – Title Sequence from 4A Games:

Created by Elastic.tv, the award winning makers of some of the most iconic title sequences of recent years including Game of Thrones and Westworld, this beautiful introduction to the game is set to an original score by Metro series composer Alexey Omelchuk.

Watch the Metro Exodus – Artyom Edition for a look at some of the amazing hand-crafted items some lucky people will get including a fully-functionally Nixie Watch, gas mask, bullet lighter made from a sniper shell, Spartan dog tag engraved with your name, and more:

We are incrediby excited to reveal the Metro Exodus Artyom Edition, an incredibly limited hand-crafted and priceless edition, created with 4A Games and Metro author Dmitry Glukovsky.

This extraordinary bespoke edition is so rare only ten have been made, and they are not available to purchase in any store – instead, Metro fans around the world will have the opportunity to win them via a number of planned promotions in the coming weeks.

The first of these priceless editions has been given to 4A Games – the remaining nine will be available to win via a series of upcoming promotions.

Learn what to expect from the collector’s edition of the game in Metro Exodus – Spartan Collector’s Edition Revealed:

Fans should note that The Spartan Collector’s Edition is available in strictly limited supply.

Watch the Metro Exodus – gamescom 2018 Trailer from 4A Games:

Thousands of kilometres from the ruins of Moscow, Artyom and his companions discover what seems like paradise – a lush, green valley, teeming with life.

But if their years in the Metro have taught them one thing, it is this:

And here, terror has a new face…

Picnic Time Metro Kart Rolling Coolers are fantastic for picnics, concerts, and trips to the beach. They feature a cooler with a large zippered opening for easy access that can easily be attached to a wheeled trolley for effortless mobility.  The cooler has room for […]

Today, IO Interactive released the Hitman 2 Announce Trailer and announced that the game would be available on the PC, PlayStation 4, and Xbox One on November 13, 2018. Like the previous games in the series, it is a third-person stealth shooter where you play […]

The heroes save the day in comics, games, and movies, but they wouldn’t be able to do it without their weapons, and the Famous Weapons Poster shows off 52 iconic weapons that are almost as popular, or sometimes more popular, than the characters that use […]

Just because you are in the office, doesn’t mean you are defenseless. This Office Weapons Book will show you how to make 30 different weapons you can build from office supplies. You will never be without an office weapon now. This is a great way […]