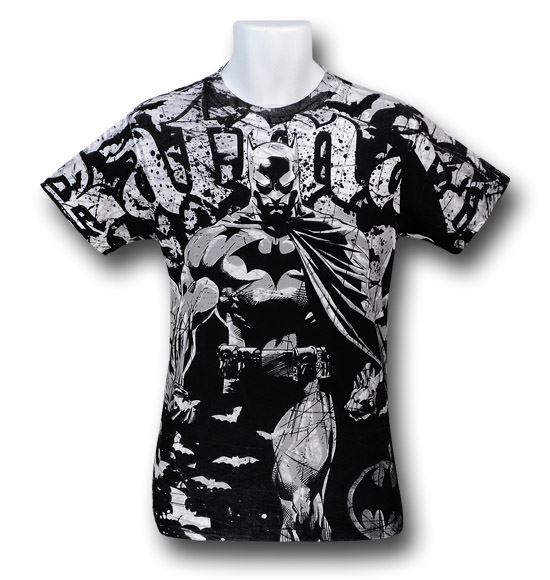 A comic book legend brings the Dark Knight to life on the Batman Urban Legend All Over Print T-Shirt.

You get a whole lot of awesome when a legend works on a legend so be prepared for plenty of attention when your Bat-buddies see this tee. In addition to an incredibly eye-catching black-ink-style image of Batman, along with elements like bats and the Bat Signal, the shirt also features an edgy splatter effect and Batman’s name in an artistic font that looks as tough as the streets of Gotham City. Even better, you can tell everybody the image was designed by legendary comic book artist Jim Lee. On the downside, even though the artwork goes from edge to edge on the front of the shirt, it’s not on the back.

The Batman Urban Legend All Over Print T-Shirt is available for $21.99-$26.99 at SuperHeroStuff.com.

Sometimes you just need some shelf space where you don’t have a shelf. Instead of rearranging the entire room, just whip out the Urban Shelf to catch your eReader, glasses, book, phone, or glass of milk… or whatever your beverage of choice is. Maybe you’re […]

We don’t always like to think about it, but it is a good idea to be prepared. Accidents can happen. That’s why this M48 First Aid Kit is perfect for at home or to keep in your car. This first aid kit comes with 56 first […]

If you want to help Batman get crime off the streets, the best way is to become a member of the Gotham Police Department. However, it is tough to get accepted. So wear this Batman Gotham City Police Beanie and feel like you are doing […]

Need an eye-catching piece of wall art to celebrate Batman’s 75th anniversary? The Batman 75 I Bleed for Gotham Art Print is sure to get plenty of attention. Cleaning up Gotham City is hard work so it makes sense that having a little blood spilled […]

Let the Bat Signal summon the Dark Knight to your house with the Batman Bat-Sky Art Print, created by comic book artist Neal Adams. Hold on to your utility belts, Bat-fans, because it will take a lot of Bat-love to get this bit of artistic […]