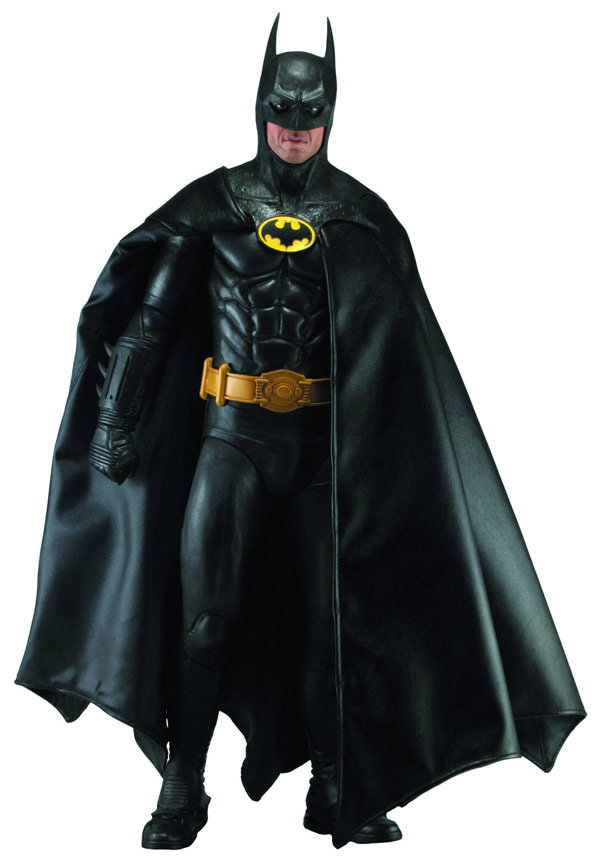 If you enjoy the grim version of the Dark Knight as he is in the movies today, you need to get the Batman 1989 Movie Michael Keaton 1:4 Scale Action Figure because the man behind Beetlejuice is also the guy that put Batman back on the road to being a serious superhero.

Before Keaton brought Batman to life on the big screen, our last live-action memory of the Caped Crusader was in the 1966 TV show, so, yeah, bow to Michael Keaton and show him proper respect. Otherwise, we might have a big-screen version of Adam West trying to entertain us.

The 18-inch-tall action figure features over 20 points of articulation, along with a real fabric cape, utility belt, Batarang, grapple-gun, interchangeable hands, and more.

The Batman 1989 Movie Michael Keaton 1:4 Scale Action Figure will be available October 2013, but it can be pre-ordered now for $84.99 at Entertainment Earth.

The Dark Knight is looking a little blue (and purple) with the 1989 Video Game Batman 7-Inch Action Figure, offering up a video game version of the hero based on the 1989 8-bit side-scrolling game. Batman has always had legions of admirers within the ranks […]