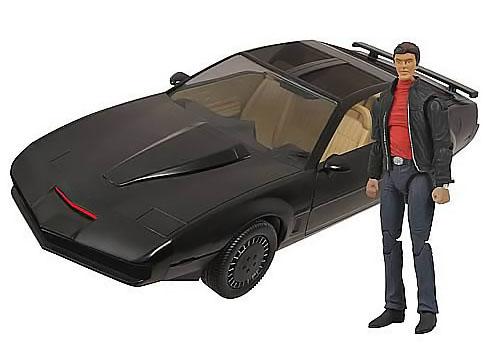 Before he was running down the beach with a bevy of bouncing beauties in Baywatch, David Hasselhoff was fighting crime with a geektastic hi-tech car. The Knight Rider KITT Vehicle with Michael Knight Action Figure lets you relive those adventurous times of the early 80′s…before The Hoff decided he preferred working with women in tight bathing suits over a car that talked to him.

While this version of KITT might not be bullet-proof or able to drive itself, the wheels do spin and the doors do open, and 5 LED’s in the front sensor bar make the lights pulsate just like in the TV show.

The limited edition, roughly 13-inch long vehicle based on the iconic 1982 Pontiac Trans-Am from the TV series, is compatible with many 3 3/4-inch action figures but won’t want just anyone getting their little plastic hands on this ride because you also get a Michael Knight action figure.

To make your Knight Rider love complete, you can even hear the voice of KITT himself (William Daniels) speak several different phrases, including:

Slip on your leather jacket, feather your hair, and get ready to ride back to 1982 with the Knight Rider KITT Vehicle with Michael Knight Action Figure for $59.99 at Entertainment Earth. KITT and Michael are available for pre-order now and scheduled for arrival in February 2013.

I loved Knight Rider when I was a kid. KITT was the best car in the world. I wanted to be like Michael Knight and ride into adventure. I wish they had this Knight Rider KITT Super Pursuit Mode Minimates Vehicle back then. This Previews […]

Fans of the Knight Rider TV show all love KITT. Who doesn’t love a talking smart car? Well, now you can have your very own Knight Rider KITT Light-Up Key Chain. It makes keeping your keys organized fun and geeky. This key chain features lights […]

I can hear that theme music already. This Knight Rider K.I.T.T. USB Car Charger makes your ride look like K.I.T.T. from the hits 80s TV show. It has light bars that sync to audio which plays back 10 different phrases. This is an awesome blast […]

What would be the next best thing after having your own robot version of David Hasselhoff? Probably your own radio controlled KITT. This sleek, customised Pontiac Trans-Am was impervious to attack, could cruise at 300mph and was loaded with hi-tech armaments. It could even […]

Fans of the Knight Rider TV series will want to display this Knight Rider K.A.R.R. Hot Wheels Elite 1:43 Scale Vehicle proudly in their collection. K.A.R.R. stands for Knight Automated Roving Robot. This 1:43 scale car has an incredible amount of detail and looks like […]

Fans of 80s TV will appreciate this Knight Rider Replica “Knight” License Plate for their car. You’ll want to cue the theme music and start talking to KITT. That’s okay, as long as you don’t hear him talking back to you. This is an exact […]

Johnny Blaze is ready to ride as the Spirit of Vengeance becomes the collectible Ghost Rider Sixth-Scale Figure. Standing 12-inches tall, this highly-articulated figure features the cursed motorcycle stuntman as the flaming demon known as Ghost Rider. Dressed in a detailed, tailored wardrobe that includes […]

The Cybermen are one of the Doctor’s fiercest foes. They are some pretty nasty robots. Now you can build your own cyberman with this Doctor Who Super Kitt-O Cyberman Kit. If you have ever wanted your very own cyberman this kit will deliver it. This […]

These Doctor Who Kitt-O Construction Figures are pretty awesome. These are paper construction figures that come flat packed. All you have to do is pop out the pieces and construct your own character from flat to 3D. It’s a fun way for Doctor Who fans […]

Back when I wasn’t as into instant messaging and chatting, (or rather, back when I was still more of a noob), I always used to find it puzzling whenever I saw or heard people use “lol” or “rofl” or “lmao.” They definitely don’t make any […]