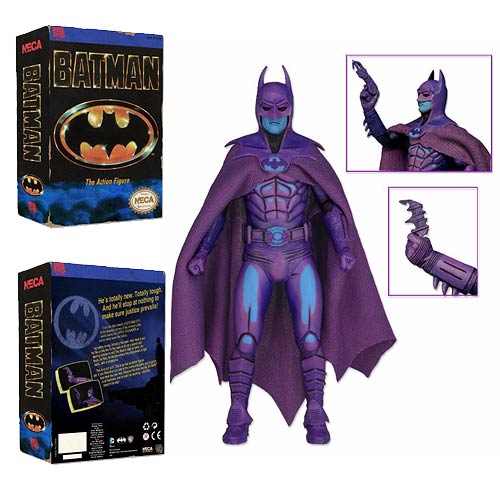 The Dark Knight is looking a little blue (and purple) with the 1989 Video Game Batman 7-Inch Action Figure, offering up a video game version of the hero based on the 1989 8-bit side-scrolling game.

Batman has always had legions of admirers within the ranks of comic book readers but Michael Keaton’s portrayal of the Dark Knight in 1989s Batman brought the Bat to the masses, and it didn’t take long for Gotham City’s protector to get his own video game… although he was purple in his digital home console adventure.

This limited-edition, 7-inch-tall action figure has the coloring to match his 8-bit digital counterpart, as well as 25 points of articulation, a removable cape, a Batarang, and a spear gun. To add a little nostalgia to the figure, it comes in special window box packaging designed to look and feel like the packaging of the classic 1989 video game.

The 1989 Video Game Batman 7-Inch Action Figure will be available November 2014 but it can be pre-ordered now for $19.99 at Entertainment Earth.

You need this Batman 1989 Batman 5 3/4-Inch Bendable Action Figure in your collection. It depicts Batman from the hit 1989 Tim Burton movie. The Caped Crusader comes to you in bendable action figure form, with Michael Keaton’s likeness. This highly detailed action figure can […]

You are going to love this Batman 1989 1:24 Scale Batmobile with Batman 3-Inch Bendable Figure. It’s like it is 1989 all over again. Superhero movies are just about to make a comeback and Michael Keaton is Batman. It was a great time to be […]