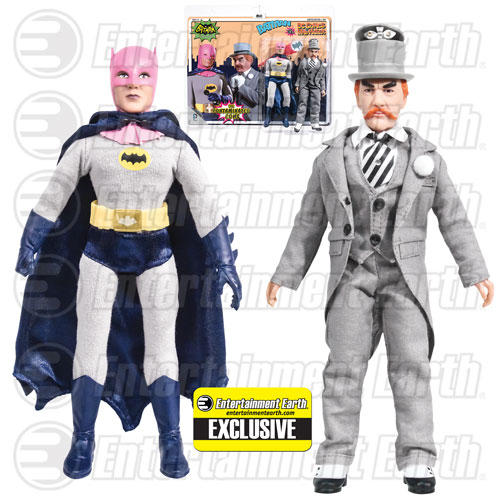 This limited edition action figure 2-pack features Batman and the Mad Hatter and Batman features a radioactive pink mask. These figures are based on the “The Contaminated Cowl” episode of the 1966 TV series. They stand 8-inches tall and have cloth outfits, even original Mego articulation.

How will Batman get out of this one? Tune in next time, same Bat-time, same Bat-channel! Only $69.99 from Entertainment Earth. Pre-order it now for May.

The Batman Classic 1966 TV Surfing 8-Inch Action Figure Set contains 4 fully articulated Mego-style action figures all ready to catch a wave. You get Batman, Chief O’Hara, The Joker, and Barbara Gordon. They all stand 8-inches tall! Each figure includes over 15 points of […]

The most renowned Auror of all time gets his own action figure with the Harry Potter Alastor ‘Mad Eye’ Moody Sixth-Scale Figure. Based on Brendan Gleeson’s portrayal of the character in Harry Potter and the Order of the Phoenix, this 11.81-inch-tall-figure has everything a wizard […]