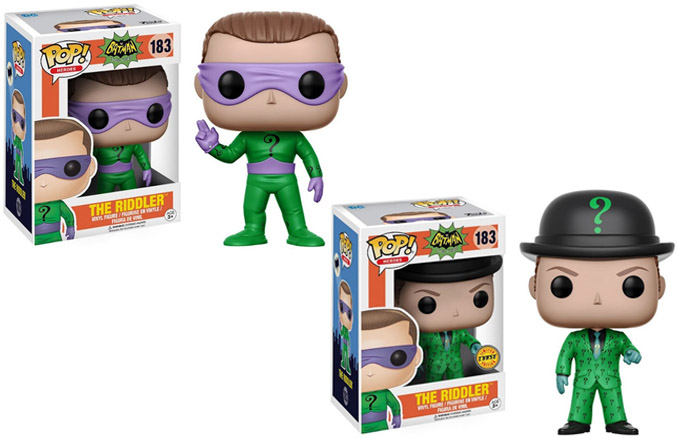 No need to strain your brain asking if the Batman 1966 TV Series Riddler Pop! Vinyl Figure is awesome because the answer is a definite yes.

Based on Frank Gorshin’s portrayal of the riddle-loving villain in the classic 1966 Batman television series, this 3 3/4-inch tall vinyl figure features the Riddler in all his nefarious glory. But which Riddler will it be? That’s a question not even Batman can answer.

Because this item may have variants randomly inserted throughout the production run, you may get a Riddler wearing his classic green tights or you may get a more formal Riddler, dressed to kill in a question-mark-covered suit. The only way to know is to get one and see for yourself.

Get ready to do the Bat Time Warp because Rout.com has great prices on Batman 1966 merchandise.

You won’t get better with riddles when you wear the Batman Riddler Question Mark T-Shirt but even the Dark Knight will have to appreciate your style. The brilliant Edward Nygma is probably the smartest member of Batman’s Rogue Gallery but he tends to not get […]

Riddle me this, Bat-fans. When is a Batman not a Batman? When it’s the Batman Impopster Riddler Pop! Vinyl Figure, of course. The Riddler believes he’s found the perfect way to move around Gotham City without being troubled by the cops. He’ll just add a […]

Riddle me this, Caped Crusader. What’s green, grinning, and covered in questions marks? The Batman ’66 Riddler Maquette, of course. Standing 12 1/2-inches tall and based on Frank Gorshin’s portrayal of the character in the classic Batman television series, the Riddler stands atop a puzzle […]

Riddle me this. What’s green, stylish, and covered in question marks? These Riddler Leggings, of course. You don’t need a question mark cane or enjoy confusing Batman with riddles and puzzles in order to enjoy these leggings from Black Milk Clothing’s new Hot Mess collection […]