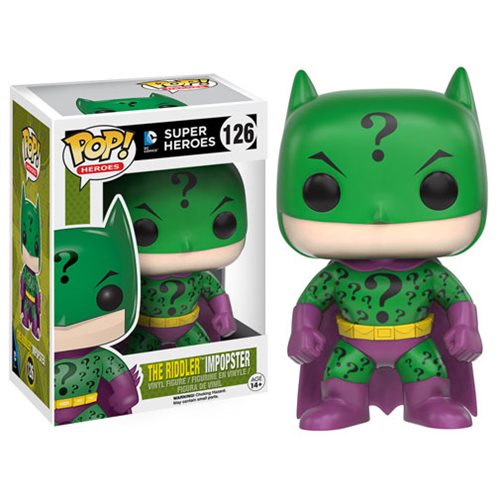 Riddle me this, Bat-fans. When is a Batman not a Batman? When it’s the Batman Impopster Riddler Pop! Vinyl Figure, of course.

The Riddler believes he’s found the perfect way to move around Gotham City without being troubled by the cops. He’ll just add a Batman-style cape and cowl to his usual question-mark-covered suit and everything will be fine. Something tells me the disguise won’t fool anyone, though, especially when he starts asking riddles. The Dark Knight isn’t usually that chatty.

The Batman Impopster Riddler Pop! Vinyl Figure will be available July 2016 but it can be pre-ordered now for $9.99 at Entertainment Earth.

The Dark Knight goes for a different look with the Batman Impopster Harley Quinn Pop! Vinyl Figure. No, this isn’t like those Rainbow Batman figures, where Bats dressed in different colors to make sure the bad guys didn’t notice that both Robin and Dick Grayson […]

Harvey Dent does his best Dark Knight impersonation with the Batman Impopster Two-Face Pop! Vinyl Figure. The creepiest addition to Funko’s Impopster series has arrived, with Harvey Dent channeling the Dark Knight to create a very unique Batman. He has the cape. He has the […]

The Penguin is looking a little batty with the Batman Impopster Penguin Pop! Vinyl Figure. Oswald Cobblepot still loves his penguins but he has a new fondness for bats as he joins Funko’s Impopster collection as a monocle-wearing Dark Knight. He has the cape, cowl, […]

No need to strain your brain asking if the Batman 1966 TV Series Riddler Pop! Vinyl Figure is awesome because the answer is a definite yes. Based on Frank Gorshin’s portrayal of the riddle-loving villain in the classic 1966 Batman television series, this 3 3/4-inch […]

You won’t get better with riddles when you wear the Batman Riddler Question Mark T-Shirt but even the Dark Knight will have to appreciate your style. The brilliant Edward Nygma is probably the smartest member of Batman’s Rogue Gallery but he tends to not get […]

Riddle me this. What’s green, stylish, and covered in question marks? These Riddler Leggings, of course. You don’t need a question mark cane or enjoy confusing Batman with riddles and puzzles in order to enjoy these leggings from Black Milk Clothing’s new Hot Mess collection […]