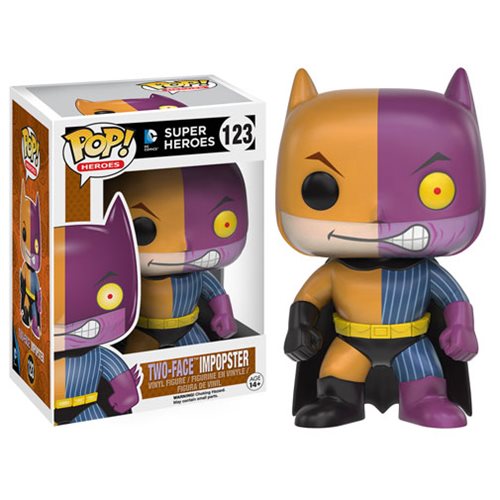 The creepiest addition to Funko’s Impopster series has arrived, with Harvey Dent channeling the Dark Knight to create a very unique Batman. He has the cape. He has the cowl. He even has the utility belt. But I don’t think Commissioner Gordon (or anyone else) will be fooled by Two-Face’s attempt at going undercover as the Caped Crusader.

The Batman Impopster Two-Face Pop! Vinyl Figure will be available August 2016 but it can be pre-ordered now for $9.99 at Entertainment Earth.

The Dark Knight goes for a different look with the Batman Impopster Harley Quinn Pop! Vinyl Figure. No, this isn’t like those Rainbow Batman figures, where Bats dressed in different colors to make sure the bad guys didn’t notice that both Robin and Dick Grayson […]

The Penguin is looking a little batty with the Batman Impopster Penguin Pop! Vinyl Figure. Oswald Cobblepot still loves his penguins but he has a new fondness for bats as he joins Funko’s Impopster collection as a monocle-wearing Dark Knight. He has the cape, cowl, […]

Decisions, decisions. If only there was a way to make them easier. Well, Harvey dent just flips his coin to make them. You can too with this Batman Dark Knight Harvey Dent & Two-Face Coin Replica Set.

Riddle me this, Bat-fans. When is a Batman not a Batman? When it’s the Batman Impopster Riddler Pop! Vinyl Figure, of course. The Riddler believes he’s found the perfect way to move around Gotham City without being troubled by the cops. He’ll just add a […]