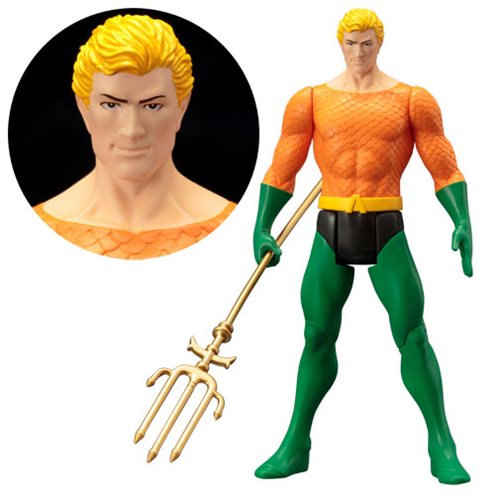 Forget the Khal Drogo look because the king of the seven seas is going with his old-school style for the Aquaman Super Powers Collection ArtFX+ Statue.

Yes, just like with Superman, Batman, Green Lantern, and the Flash, this approximately 8-inch-tall statue is based on the classic Super Powers Collection action figures, so they look articulated even though they’re not.

However, the statue does come with an alternate arm to display his power action move. I honestly don’t know how that works because the actual Super Powers Aquaman figure had a power move called the Deep Sea Kick.

The Aquaman Super Powers Collection ArtFX+ Statue will be available January 2017 but it can be pre-ordered now for $34.99 at Entertainment Earth.

One of Aquaman’s classic villains gets the spotlight as the Aquaman Black Manta Forever Villains ArtFX+ Statue. The man has been battling the Lord of Atlantis since 1967 and he still hasn’t found a helmet that fits. That over-sized noggin serves a purpose though, letting […]

Aquaman is on land and ready to do battle, looking fierce in this Aquaman The New 52 ArtFX Statue. This is Aquaman from the The New 52 comic book series. He stands 8-inches tall on his Justice League display base and looks pretty stunning with […]