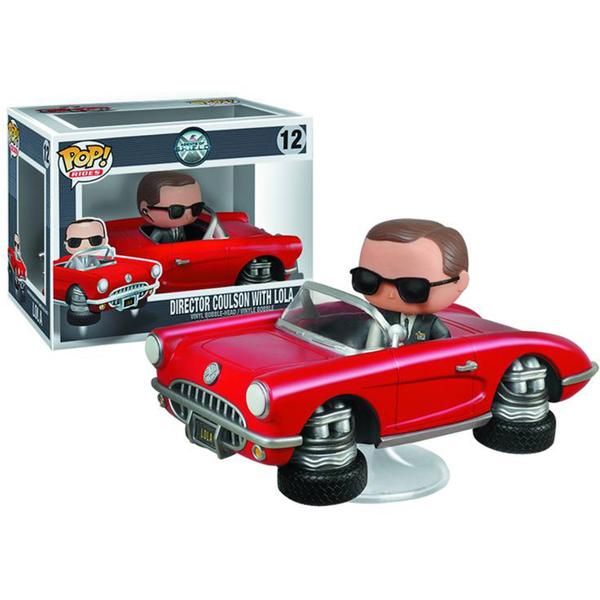 Agent Coulson tells everybody to keep their hands off but you can be a rebel and put your hands on his most-prized possession with the Agents of SHIELD Lola with Agent Coulson Pop! Vinyl Vehicle.

Soaring off the television and into your greedy little hands is the red 1962 Chevrolet Corvette convertible that Agent Coulson drives and flies… because someone as cool as Coulson deserves a cool ride. The Pop! Vinyl vehicle is featured with VTOL (Vertical takeoff/landing) activated, and comes with Agent Coulson sitting behind the wheel. Don’t tell him, but other Pop! Vinyl figures also fit in the vehicle… although it would be oh-so wrong to put anyone else in there.

The Agents of SHIELD Lola with Agent Coulson Pop! Vinyl Vehicle will be available October 2015 but it can be pre-ordered now for $24.99 at Entertainment Earth.

The Captain America U.S. Agent Pop! Vinyl Figure manages to make the darker, edgier version of Captain America look cute. In his quest to become a hero, John Walker has gone through various identities. Busting onto the scene as Super Patriot, he eventually upgraded to […]

The Marvel Agent Carter Pop! Vinyl Figure is on the scene, which means all the guys can sit back and relax while she shows them how this secret agent stuff is done. Before Nick Fury, before the Avengers, there was Peggy Carter, capable of kicking […]

Present your S.H.I.E.L.D. ID in style with Marvel’s Agents of S.H.I.E.L.D. RFID Blocking Wallet. No one will ever doubt that you work for the organization again. It has plenty of room for all of your cash and cards too. It will keep all of your […]