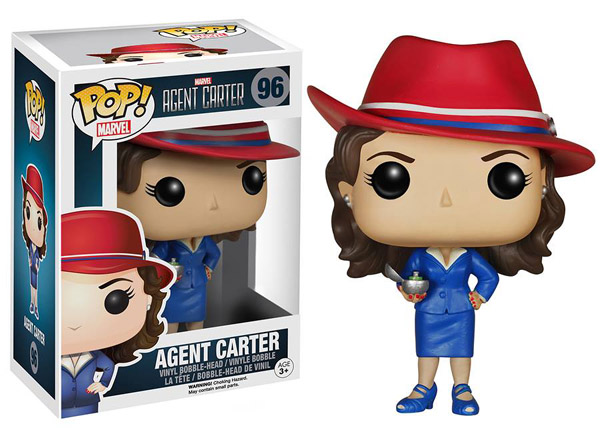 The Marvel Agent Carter Pop! Vinyl Figure is on the scene, which means all the guys can sit back and relax while she shows them how this secret agent stuff is done.

Before Nick Fury, before the Avengers, there was Peggy Carter, capable of kicking butt and winning the heart of Captain America. Standing 3 3/4-inches tall and based on the likeness of Hayley Atwell’s portrayal of Peggy in the movies and television series, Agent Carter defends truth, justice, and the American way while rocking some red and blue fashion sense.

The Marvel Agent Carter Pop! Vinyl Figure will be available August 2015 but it can be pre-ordered now for $9.99 at Entertainment Earth.

Peggy Carter hides in the shadows on the Agent Carter Silhouette T-Shirt, and she manages to look stylish while doing it. Speaking of style, you’ll probably never be able to work the blue trench coat and red fedora as well as Captain America’s true love […]

If Agent Peggy Carter and Captain America had met as kids, the scene depicted on this Get Carter Art Print is probably the exact way their friendship would work. Steve Rogers is a brave guy, no doubt about it, but Peggy has the attitude; the […]

The Amazon Princess goes retro with the Wonder Woman Lynda Carter 7-Inch Vinyl Figure. Everyone’s talking about Gal Gadot’s Wonder Woman these days but long before Gal picked up the Lasso of Truth, Lynda Carter was rocking the star-spangled shorts as the princess of Amazon […]

The Captain America U.S. Agent Pop! Vinyl Figure manages to make the darker, edgier version of Captain America look cute. In his quest to become a hero, John Walker has gone through various identities. Busting onto the scene as Super Patriot, he eventually upgraded to […]

Forget the purse because all you need are these Double Agent Shoes to keep everything with you that you need. Those day-to-day essentials are always just a foot away (ha) when you slip your tootsies into these shoes that would have Agent Peggy Carter getting […]