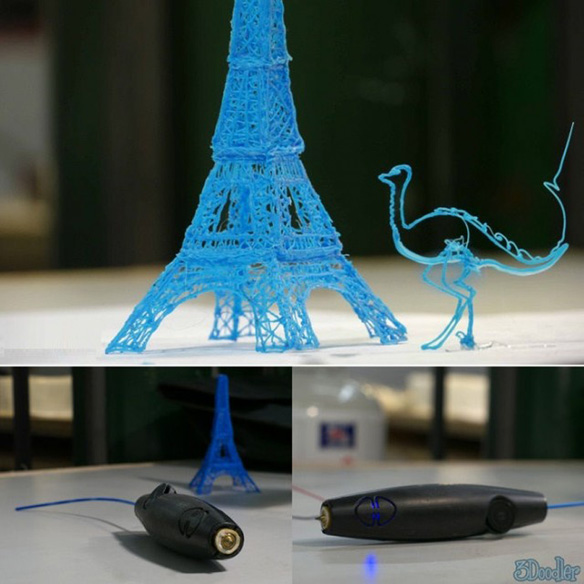 Want to grab hold of the popular 3D printing trend but can’t afford an expensive 3D printer? The 3Doodler 3D Printing Device might cost more than the average pen but it’s still cheaper than a full-size printer… and an average pen can’t create a 3D object, no matter how well you draw.

The 3Doodler works by heating up the plastic strips as they pass through the pen’s body, making the plastic easy to mold, and it cool down fast enough to hold its shape, allowing you to create three-dimensional structures by doing nothing more complicated than simply drawing.

Because of its versatility, the 3Doodler can be used to create flat forms on paper that can then be peeled off, to create free-standing 3D objects, or to create separate parts that can be joined together.

The 3Doodler 3D Printing Device (including 50 strands of plastic) is expected to start shipping February 2014, but it can be pre-ordered now for $99 at The3Doodler.com.

A fun way to get your child’s imagination moving is by working on DIY or craft projects together. While the Money Printing Kit isn’t something that requires a whole lot of assembly or gluing some wooden or metal parts together, it will provide you and […]

So you are on the beach and some guy is being a jerk to you? What do you do? Well, with these FUBAR – Rude Printing Sandals, you can just walk away and deliver a very strong message. You don’t even need to open your […]

Why just use a pen for writing, when it it be a multi-function tool? This Messograf Caliper Pen servers several purposes. First, it s a retractable ballpoint pen, and a damn cool looking one at that. Second, it is a Vernier caliper that can be […]

Have you ever been in a situation where you needed your pen the most–and it just ran out of ink? That has happened to me a lot of times, which has resulted in some checks remaining unsigned, some forms remaining unsubmitted, and a whole lot […]