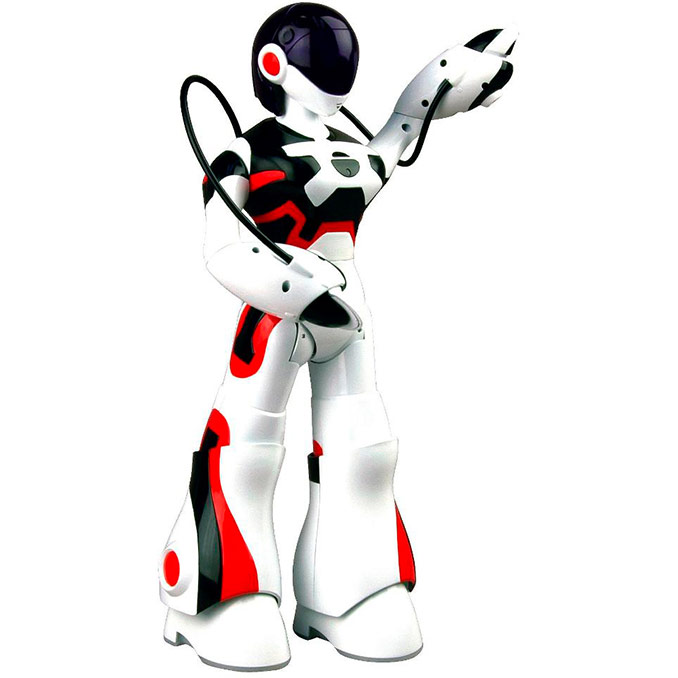 As part of a WowWee’s new “Insider Video” series, two clips giving a sneak peek at some of Femisapien’s more advanced features have been released.

The first video shows WowWee über-inventor Mark Tilden showing just how easy and it is to script Femisapien simply by moving her body around (posing):

The 2nd shows how the scripting-by-posing can be used to create scripts that show truly intricate movements in the setting of a Femisapien fencing match:

The Femisapiens aren’t really fighting each other since it’s all scripted and they are not tracking each other’s movements and then striking at a target, it does make the point strongly of just how nimble she is and just how easy it is to create fun skits with her that involve advanced body movements.

Note: The E.M.A. robot recently announced by Sega Robots is really WowWee’s Femisapien, which will be released shortly in the USA for a suggested retail price of $99 USD.

Here’s a brand new video of WowWee’s upcoming Wrex The Dawg robot. The guys over at RobotsRule has just uploaded this video review that covers the important features and capabilities of WowWee’s hilarious cartoon character come to life, Wrex The Dawg. In the video you’ll […]

The Nüvifone smartphone from Garmin won’t be available until Q3 2008, but here are a couple of videos to give you an idea of what to expect. Nüvifone Intro Nüvifone Scenario (This video is no longer available.) About the Garmin Nüvifone The nüvifone is an […]

The AIBO super hackers have entered the Pleo party full strength by porting one of their most powerful and fun AIBO performance tools over to Pleo. “Skitter”, a full featured skit creation tool for the AIBO designed by the AIBO wizard known as DogsBody, has […]