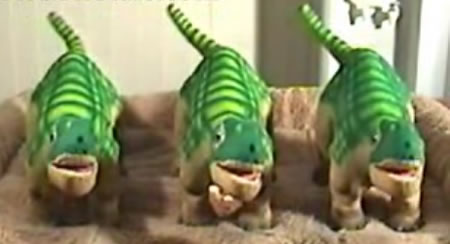 The AIBO super hackers have entered the Pleo party full strength by porting one of their most powerful and fun AIBO performance tools over to Pleo.

“Skitter”, a full featured skit creation tool for the AIBO designed by the AIBO wizard known as DogsBody, has now been reincarnated as “MySkit”. It allows Pleo owners to create their own performances giving them control over Pleo’s various motors including the ability to import existing animations from the original Pleo library, with the added capability of adding and synchronizing sounds to movements. Skits are then assigned to the various touch sensors on Pleo’s body allowing them to be triggered by a touch to that location, or they can also be run automatically on startup.

In this video, I show Digger, Claire, and Pendragon, my 3 Pleos, doing a skit that involves a short bit of dialogue followed by a song complete with synchronized lip movements. Each Pleo is running a skit designed just for their part with it’s own animations and sounds.

I’ll be releasing the files that comprise the skit so all Pleo owners can perform the skit for their friends and family and be the star in their own Pleo show. I’ll also include instructions on how to set up and perform the skit along with an alternate Claire script for the ladies out there that has Claire saying “Mommy” instead of “Daddy”.

These skit files and performance instructions will be available at the Robots Rule Pleo blog in two weeks. Meanwhile, you can download and read about the MySkit Performance Editor for Pleo over at dogsbodynet.com.

You might also want to check out YAPT (Yet Another Pleo Tool). This tool allows Pleo skitters to attach skits created with “MySkit” to more advance triggers such as Pleo’s sound and tilt sensors, etc.

At a recent SAAG 2007 meeting (Sacramento Area Aibo Gathering), YouTube videographer and SAAG member EllysDogHouse took this beautiful high quality video of a Pleo, fresh out of the box, taking his very first baby steps. You get to see Pleo squirming about being held […]

In a announcement sent out to those on Ugobe’s mailing list for official Pleo news and updates, Ugobe stated that Pleo is now officially in production.

Here’s the first professionally shot video that shows tons of people petting, cooing, baby talking, and losing their composure over the adorable baby blue eyed dinosaur we call Pleo. Finally you get to see how people really feel about Pleo as they pet him uncontrollably […]

If the Alien Stress Reliever doesn’t do the trick for you, maybe this video clip of Pleo visiting Sea World will do a better job to relieve you from stress: The Pleo in the video is Pixie (which also happens to be the name of […]

A brand new section specifically geared toward Pleo robot dinosaur developers has just been launched over at the PleoWorld website.

Dotklok is the name of this cool open source digital clock that is capable of displaying the current time with many different animations, such as numeric, graphic and abstract. There’s even a Pong mode, if you’re into retro games. The motivation for DOTKLOK was to […]

As the weather changes for the better and you start to plan camping trips, hiking trips and beach adventures, you’re going to want to make sure that you have a handy multi-tool on you at all times. The CRKT Eat’N Tool isn’t your normal multi-tool, […]

The Taiwanese company Thunder Tiger has come up with an advanced radio-controlled helicopter for those looking for something more than the average indoor choppers. A built-in USB connector allows you to read warnings and control settings such as throttle curve, pitch curve, servo travel and […]