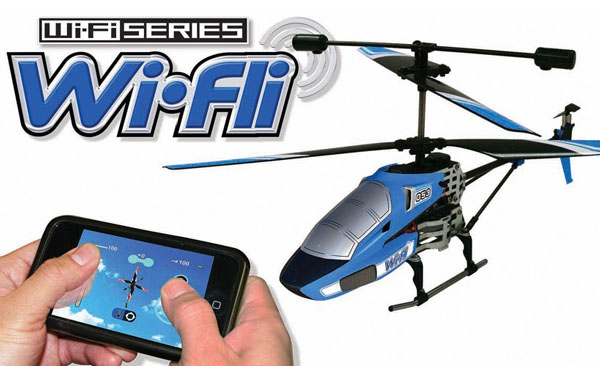 If you would’ve told me ten years ago that my cell phone could act as a remote control for flight toys, I would’ve called you crazy. If you’d bring the subject up today, I’d tell you that there’s an app for that. Introducing the Wi-Fli R/C Helicopter.

Remember the Griffin Helo TC Assault Helicopter we showed you fairly recently? The Helo operates by plugging in the Flight Deck module into your iPhone or Android phone headphone jack. The Wi-Fli R/C Helicopter is built similar in concept in that it can be manipulated by either type of phone via their touchscreens; however the difference is that you don’t need to plug anything into your smartphone to operate the Wi-Fli helicopter. All it requires is that you download the free control app on your phone, and off you go. Basically, all you need is your phone, the helicopter, and hand-eye coordination.

Your phone isn’t the only thing that can morph into a remote. You can also use your iPod touch, iPad, Android tablets and laptops, just as long as you have the right operating system and wi-fi capabilities. Another bonus is that you don’t need to buy batteries, thanks to the handy 3.7V lithium battery that charges with the USB cable that comes with.

It might take a little time to master flying this copter through your touchscreen compared to the usual joystick remotes you’ve piloted with all your life. But practice makes perfect. In the box, you will get a replacement tail rotor and balance bar connectors for backup. However, you might want to add the company’s website, Interactive Toy Concepts, to your “favorites” in case you need to order more parts in the future.

Amazon and Target sell the Wi-Fli R/C Helicopter in the $40-$50 range.