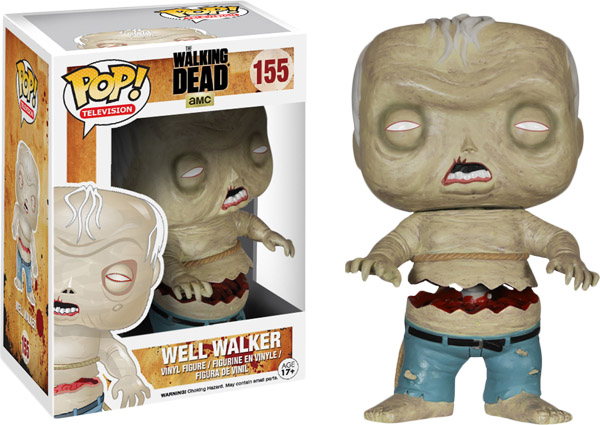 Can a bloated, rotting, waterlogged corpse be cute? It can be when it’s the Walking Dead Well Walker Pop! Vinyl Figure.

Just look at the guy. It’s almost impossible to resist giving him cuddles, isn’t it? Okay, maybe that’s taking things a bit too far but the Funko version looks a lot nicer than the actual walker in The Walking Dead. Could you imagine having that guy in your home? Ewww.

Just like his onscreen counterpart, the Pop! Vinyl figure has been split in half, revealing his bloody insides and spine. Unlike the TV version, this little guy won’t try to eat you.

The Walking Dead Well Walker Pop! Vinyl Figure will be available October 2014 but it can be pre-ordered now for $9.99 at Entertainment Earth.

Get ready to enjoy a little zombie-style family time with the Walking Dead Comic Series 2 Black and White Bloody Governor and Penny Previews Exclusive Action Figure 2-Pack, but be careful around the Governor’s niece. She’s apparently teething because she likes to chew on things. […]

AMCs The Walking Dead refers to zombies as just about everything except zombies, but the Walking Dead Walker Names T-Shirt will help you keep track of the apocalyptic lingo so you won’t just kick back and wonder what all the fuss is about when someone […]

The Walking Dead Michonne’s Pet Walker Sixth-Scale Figure Set reminds us that Michonne had a very different set of traveling companions before joining Rick and the gang. During the early days of the zombie apocalypse, Michonne blended in with the walkers by keeping two re-animated […]

If zombies start roaming around in search of fresh meat and somebody gives you the Walking Dead Walker Bait Crew Socks, you can trust the fact that you are the Carl – or possibly even the Lori – of the group. Stylish and comfy, these […]

Some people bash The Walking Dead for occasionally being a little light on action but this Walking Dead Axe Walker T-Shirt will never be guilty of that particular crime. In addition to providing an eye-catching image, this shirt is also a fantastic educational tool when […]