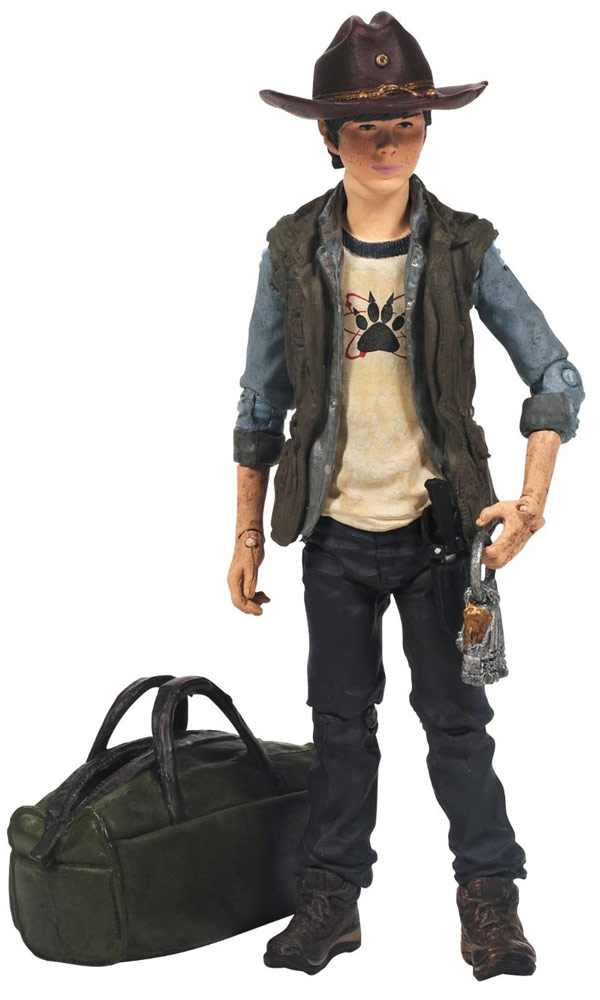 Carl won’t have any choice but to get in the house when you bring the Walking Dead TV Series 4 Carl Grimes Action Figure home, although there’s no guarantee that he won’t mouth-off to any of your other collectible figures.

I think a lot of people were hoping Carl would become zombie-chow during the early seasons of The Walking Dead but the kid has grown up a little bit. Now, instead of wondering when he’s going to whine again, I wonder when his cheese is going to slide completely off his cracker and he just starts shooting at everyone he sees.

Carl stands about 5-inches tall, features over 20 points of articulation, and comes with a removable Sheriff’s hat, hunting knife, prison keys, and a medical bag.

The Walking Dead TV Series 4 Carl Grimes Action Figure is available for $14.99 at Entertainment Earth and is ready for pre-order at Amazon.com.

The Walking Dead Carl Pop! Vinyl Figure looks like a bloody mess but that’s okay because he gets better soon. Actually, no he doesn’t. The youngest member of the Grimes family gets shot in the eye but that’s later so no need to worry about […]

Show your support for the only winning team of the zombie apocalypse with the Walking Dead Grimes and Dixon 2016 Men’s T-Shirt. Rick Grimes and Daryl Dixon know a thing or two about dealing with corrupt governors, brain-dead citizens, and even people who have developed […]