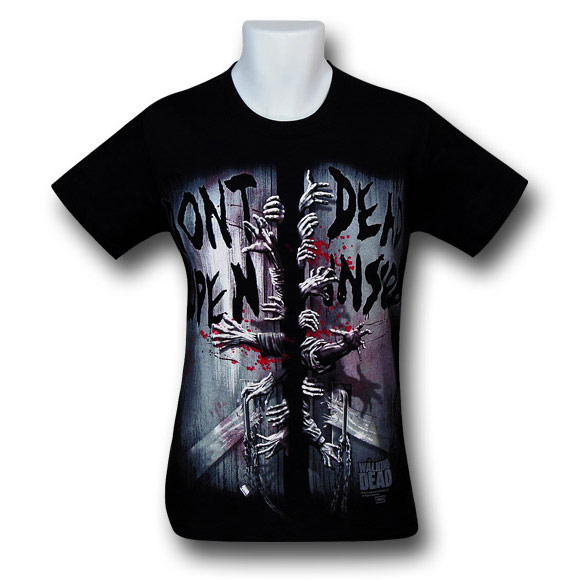 Fans of The Walking Dead will immediately recognize this familiar scene on the Walking Dead Don’t Open T-Shirt because it’s the first iconic image that was burned into our memories when the hit show first arrived on TV, and it also happens to be our very first peek at those ravenous creatures known as Walkers.

We all remember those first few minutes of the first episode. Rick Grimes wakes up from his coma to a hospital that looks like it was caught in a bomb blast, and not a soul in sight. He staggers down the hall and ponders the door that’s chained up, with the words ‘Dead Inside Don’t Open’ scrawled on it. And then, the door bangs open as much as it can and we see that dead, grey hand reach out. It’s our first peek into a world that we absolutely positively know we don’t want to live in… although it’s a blast to watch from the safety of our living room.

The image on the black, 100% cotton t-shirt takes a little artistic license with the scene from the show, featuring a lot more Walkers that are able to break the chains and board that hold the door shut. While it looks totally cool, it’s probably a good thing it didn’t play out like this on TV because I don’t think Rick would’ve survived this particular encounter.

You know you want it so go ahead and get the Walking Dead Don’t Open T-Shirt for $19.99-$24.99 at SuperHeroStuff.com. Also at Amazon.com and eBay.com.

When it comes to zombies, the most intense sight has to be seeing their undead hands reach for you, and the Walking Dead No Walkers T-Shirt is an eye-catching statement that will get the attention of any Walking Dead fan. The distressed print and artwork […]

There are a lot of rules for surviving a zombie apocalypse, like stock up on food and keep an emergency reserve of toilet paper, but the Walking Dead Don’t Git Bit T-Shirt will always remind you of the most important rule of all – don’t […]