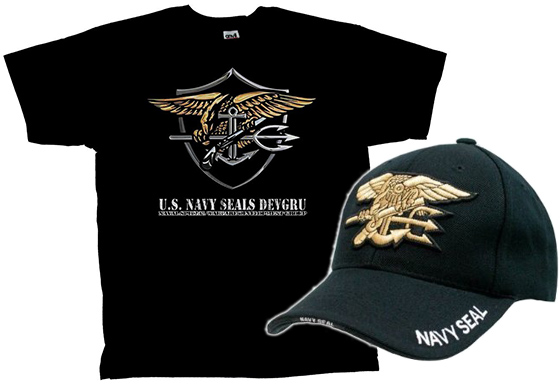 Information related to Osama Bin Laden being killed is overwhelming world-wide news outlets right now. Even here on GeekAlerts, the last few entries have been related to that news, even though these posts really aren’t about gizmos, gadgets, design, or geekiness. It’s just that this news is in the forefront of everybody’s mind, and we can’t get our hands on any secret military hardware or special forces gadgets used in the mission to really tie this event in with geek news. However, the US Navy Seals, who just complete a very heroic mission successfully, have a really cool logo, and so the best we can do is look at some of the items emblazoned with their design. 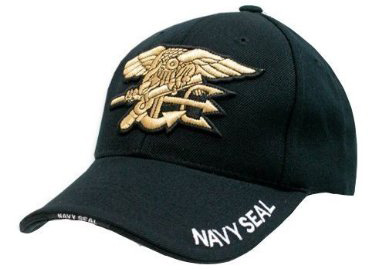 Amazon.com has a wide variety of Navy Seal Hats. One the best is the deluxe Navy Seal cap pictured above. It is embroidered with the Navy Seals Trident emblem (aka Special Warfare insignia or “The Budweiser”) and looks really cool. It also has embroidered lettering that says “Navy Seal” and a Velcro size adjuster. Another cool one available at Amazon is the Navy Seals Headwraps (i.e. Do Rag). 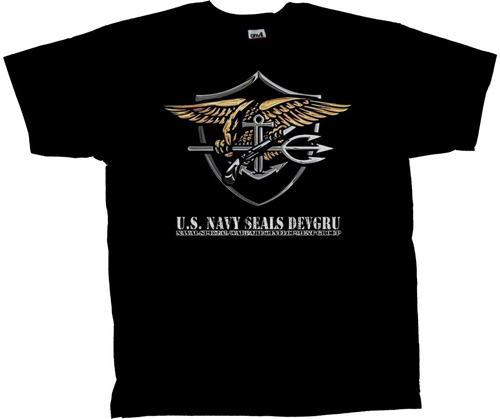 Amazon also has many different Navy Seal Shirts available. One of the coolest is the Special Warfare Development T-Shirt pictured above (as well as a very similar Hoodie). What makes this one especially bad-ass right now is that it isn’t a generic Navy Seals shirt, it is for U.S. Navy Seal Team Six, which is the group that successfully carried out the mission to kill Osama Bin Laden.

So why does the shirt say DEVGRU?

Currently, Seal Team Six (ST6) is formally called the United States Naval Special Warfare Development Group (NSWDG). It is commonly referred to as DevGru (short for Development Group) since it is much easier to say, but many people just call it SEAL Team Six, which is its former name.

Cover all your Whovian bases with the Doctor Who Gallifreyan Time Lord Seals Bracelet, because it never hurts to suck up to the people who could be in power. All Whovians know the Doctor is the best, but he’s not the only person from Gallifrey […]

This past week was full of some really cool gadgets. Just the other day we posted about the Star Wars Cookie Cutters and the Remote Control Toy Forklift, which were two of my favorites from the last week. Also near the top of the list […]

On Pi Day we presented some cool Pi related products like the Bottle Opener, T-Shirt, Pizza Pie Slicer, and Ice Cube Trays. However, to geeks like us, Pi is cool every day, and these Vam-Pi-re T-Shirts and Hoodies are awesome! Plus, it’s fun to confuse […]

Current Old Navy Coupons At GeekAlerts you can now browse the currently available OldNavy.com Coupons and sales promotions for discount clothing deals. Geeks love comfortable clothing, and when it is also fashionable and inexpensive, that is just icing on the cake. So check for the […]

Exterminate bad style with the Doctor Who Navy TARDIS Plaid Sleeve T-Shirt. Whether’s he’s rocking a fez and a bow tie or a guitar and sonic shades, the Doctor knows how to look good, and now you can look as sharp as a Time Lord […]