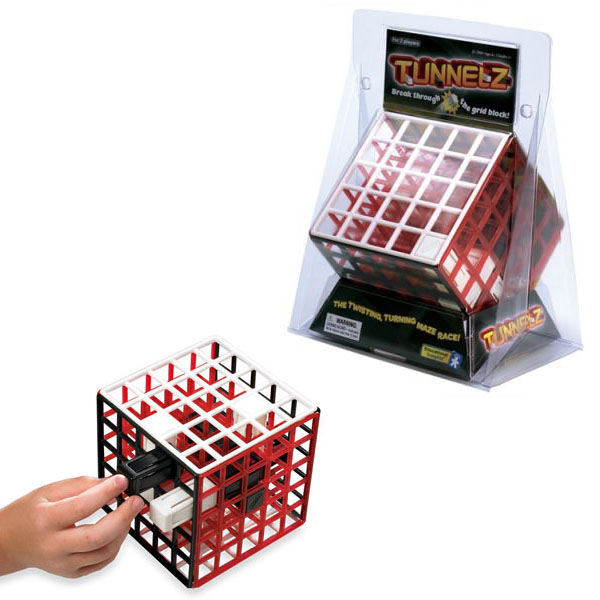 After years and years of letting our brains rot in front of the TV, some of us have decided to regain control of our long-lost neurons with the help of non-virtual reality brain games. Think of it as physical therapy for the noggin. The Perplexus Epic 3D Game and Sudoku Rubik’s Cube are good examples of brainy games that have been given the GA ‘thumbs up.’ Another GA game pick is the Tunnelz Game and it requires building…you’ve guessed it, tunnels.

Break through the grid block in this 3-D tunnel-making game. Your challenge is to create a twisting, turning (or straight) tunnel from one side of the cube to the other, while preventing your opponent from doing the same. Strategically insert blocks, constructing your tunnel while preventing your opponent from taking the lead. The uniquely designed blocks stay firmly in place so you can tilt the cube to any angle while planning your route. Think you have the advantage? Just when you think you’re at the finish line, your opponent might push your blocks out of the way. It’s a frenzy of challenging, multi-angled strategy for everyone. Includes Tunnelz cube, 16 blocks and game guide. For two players.

Tunnelz is a game that requires two players, so it requires social interaction, an area in which many geeks need improvement. But the game also brings about competition, which can be healthy and fun. Each player must try to build a continuous tunnel using their set of blocks, taking turns with the opponent who’s trying to do the same thing. Each player must thwart the other player’s tunnel from reaching the other side of the grid first.

The 5 x 5 square grid block is small and can be easily transported to parties, on road trips, and to places where boredom tends to strike. This game also a gives the eyes a much needed break from computer screens, the tele, tablets, and handheld video game consoles. Tunnelz is way cheaper than all of the above, too. Tunnelz is available at Amazon.com starting as low as $6.23.

Fans of Rubik’s Cube and puzzle people alike will love this Rubik’s Mirror Blocks Cube.  The idea is the same as the original, but now every block is the same color and a different size.  This futuristic looking Rubik’s Cube gets funky looking fast when […]

It’s a puzzle, it’s a light, it’s the Rubik’s Cube Light, bringing the iconic 80’s brainbuster to a new generation. Kids these days have smartphones and apps and MMORPGs to keep them entertained, but way back in the 1980s, entertainment was a little harder to […]

If you ever wished for teeny tiny Lego blocks, NanoBlock Micro Building Blocks are a dream come true. Each set of NanoBlocks comes with hundreds of pieces, but since they are so small, the finished design is only a few inches tall. Their micro size […]