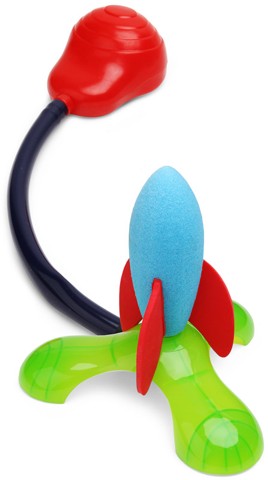 When I first read the book Angels and Demons by Dan Brown, I was intrigued and I wanted to know more about CERN, which is a bigwig European nuclear energy research center. Now the Toddler Rocket Stomp Launcher certainly doesn’t have anything to do with anything nuclear, but it has everything to do with astronomy and NASA and giving your kid a wider scope of professions to choose from.

Parents often find it easier to teach new concepts and show their kids some of life’s intricacies via games and toys. With the Rocket Stomp Launcher, your toddler can see just how cool space and studying it can be. Who knows? One day, he or she might just grow up to become a part of NASA. Teach your kids that nothing is impossible while they’re little by starting small and dreaming big.

Stomp your way to space with the Toddler Stomp Launcher. Simply put the base on the floor, dock the squishy rocket to the base, then stomp with all your might on the red bubble. The harder you stomp, the further the rocket will fly. It’s out of this world fun for wee geeks age 3 and up.

The Toddler Rocket Stomp Launcher is launching from ThinkGeek for $13.99.

Smart phones and tablets do some pretty cool things, but their true calling has been found with the iLaunch Rocket Launcher for iPhone. Forget about making calls or doing anything else that’s even remotely important because your iPad, iPhone, and iPod Touch has just been […]

If you are into modern art, style and fashion, then you probably love all things Apple and have your eye on the third generation Apple iPad. If you want a cutting edge iPad/iPhone dock for your iPad 3, then help make this Kickstarter product a […]

The bad guys go boom when the Walking Dead Daryl Dixon with Rocket Launcher Pop! Vinyl Figure is around. Fans of The Walking Dead know how tough Daryl is. If you look up the word ‘tough’ in the dictionary, there’s probably a picture of Daryl […]

Things can get pretty boring in the park with your kite and plain old water gun. Of course, you can always spice things up by getting the Xploderz XBlaster 200 or driving the Remote Control Car with Water Gun around and having it chase your kids […]