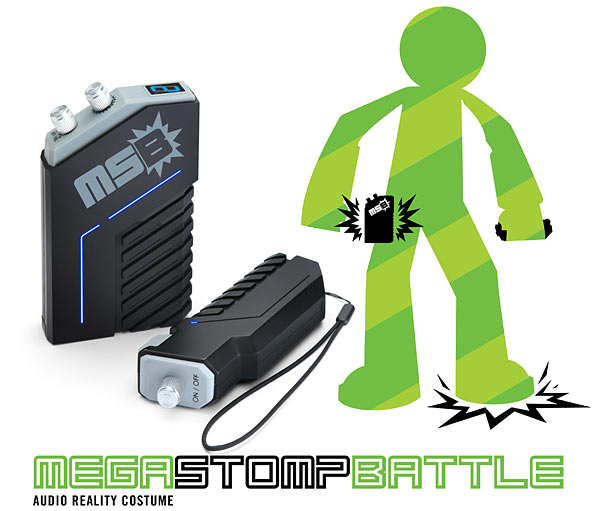 Turn sound into a costume with Mega Stomp Battle – Audio Reality Effects, and transform yourself into an auditory army of assorted creatures.

Maybe you already have the Mega Stomp Panic – Audio Reality Costume, and you’ve had tons of fun with it. You clip it on your belt and stomp around and cause panic because people think a giant monster or robot or zombie is coming after them, but Mega Stomp Battle adds a little something extra.

You still get the awesome stomping effects, but now you can make attack sounds too, courtesy of the handy wand that can be activated by either shaking it or pulling the trigger. Now, when somebody hears the squishy walk of a zombie, they can also hear the zombie munching on a victim; the stomping of a giant monster can be followed by a loud roar.

Now, in addition to stomping, you can also attack.

When I first read the book Angels and Demons by Dan Brown, I was intrigued and I wanted to know more about CERN, which is a bigwig European nuclear energy research center. Now the Toddler Rocket Stomp Launcher certainly doesn’t have anything to do with […]

You don’t have to choose. You can be both if you want. These Giant Robot and Monster Photo Frames are cute and display your pictures while turning you into either a monster or a robot. Each set includes one freestanding monster frame and one freestanding […]