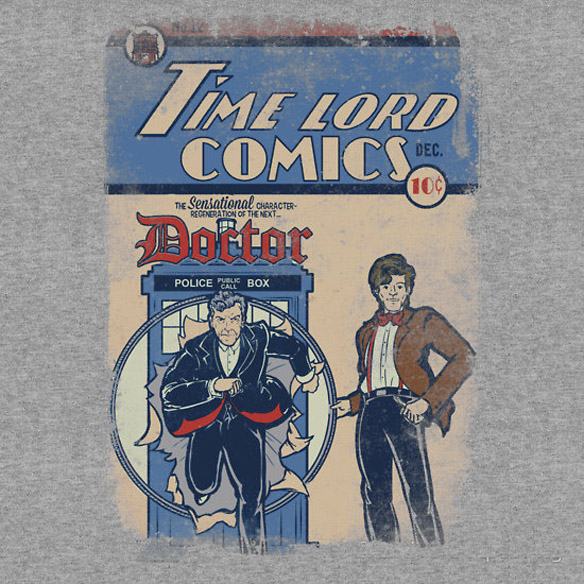 The Doctor has regenerated once again, which means it’s another round of old fans leaving, new fans arriving, and die-hard fans sticking around like always. The Time Lord Comics T-Shirt is one of those rare items capable of appealing to all three groups.

The new look for Peter Capaldi’s 12th Doctor was recently revealed so I knew it was only a matter of time before Doctor Who goodies – both official and unofficial – started to pop up.

Featuring likenesses of both Matt Smith’s 11th Doctor and Capaldi’s 12th Doctor, the shirt offers a creative way of introducing the newest face to the Time Lord gallery… although a similar set-up was done years ago when Batman introduced Robin, with the Boy Wonder being the one jumping through the hoop. That’s okay, though, because the concept works just as well here. 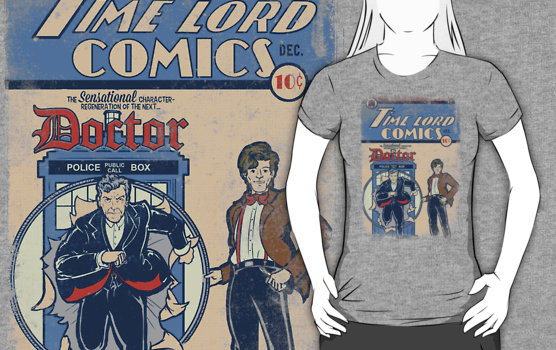 The Time Lord Comics T-Shirt is available for $24.95 at RedBubble.com.

Carry the Capaldi glare with you no matter where you go with the Doctor Who 12th Doctor Coin. So, you’ve collected all the Doctor Who Collectible Coins ranging from William Hartnell’s First Doctor to Matt Smith’s Eleventh Doctor? Excellent job, but you know a Whovian’s […]

Never bring a spoon to a sword fight… unless you’re the Doctor Who 12th Doctor with Spoon Pop! Vinyl Figure. The 12th Doctor was still getting used to his new face when he was forced to battle Robin Hood with a spoon. He showed in […]

Forget about the bow tie and put away the fez because the Doctor Who 12th Doctor Costume T-Shirt is all you need to pull off the look of Peter Capaldi’s 12th Doctor. Well, to be totally honest, a nice pair of Doc Martens would complete […]

No mere Earthling can match the always-fashionable wardrobe of a Time Lord but the Doctor Who 11th Doctor Costume T-Shirt lets you do the best you can… and you don’t even have to learn how to tie a bow tie. You can keep the comfort […]

These Doctor Who 12th Doctor Socks proclaim that you are the timelord. These cute socks feature Peter Capaldi’s 12th Doctor. They have plenty of stretch and one size fits most. Your feet will thank you. These make an awesome gift for Doctor Who fans. Doctor […]