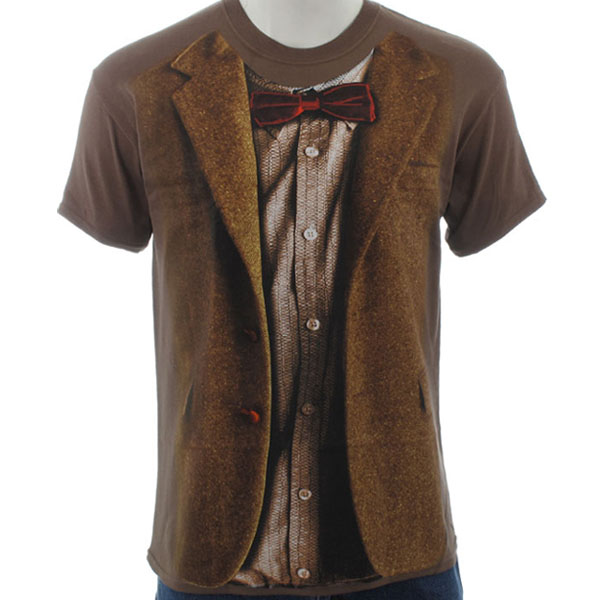 No mere Earthling can match the always-fashionable wardrobe of a Time Lord but the Doctor Who 11th Doctor Costume T-Shirt lets you do the best you can… and you don’t even have to learn how to tie a bow tie.

You can keep the comfort of a 100% cotton t-shirt but still rock the look of Doctor Who as portrayed by Matt Smith thanks to the officially licensed image of the Doctor’s clothing, which gives the impression that you’re wearing the jacket, rumpled shirt, and bow tie of the man who strikes fear in the hearts of Daleks, Cybermen, and Weeping Angels everywhere. Just find yourself a fez to plop on your head and you’ll have people coming up to you asking for a ride in the TARDIS.

If you want to look like the Doctor but bow ties aren’t your style then you can also go for a laid-back look with the Ninth Doctor Costume T-Shirt or choose from a selection of Doctor Who T-Shirt Costumes that include the fashions of the Fourth, Fifth, Sixth, and Seventh incarnations of the Time Lord.

If you have been following the adventures of the 11th Doctor, then you know that Fez’s are cool. So are bow ties for that matter. Now you can get both of the Doctor’s fashion accessories in one kit with the Doctor Who 11th Doctor Fez […]

Bow ties are cool. That’s what the 11th Doctor taught us. His fez is cool too. Now you can be cool and wear the Doctor Who 11th Doctor’s Purple Bow Tie. This is a reproduction of the bow tie Matt Smith wears in “The Day […]

The Doctor Who 11th Doctor TARDIS 1/6 Scale Replica is a beautiful reproduction of the 11th Doctor’s TARDIS and it is limited to a production run of 1000. It comes with 3 interchangeable control room backdrops and an internal illumination system with light-up rooftop lantern. […]

Chuck Bass from Gossip Girl made bow ties sort of “in” again. Before the show came along, most people considered them to be vintage and old-fashioned. And in a further bid to bring bow ties into the current scene is Nicholas Tee with his Modern Bow […]

No matter what he looks like with each regeneration, the Doctor is always stylish. And this Doctor Who 11th Doctor Men’s Jacket is a great addition to any wardrobe. It is from 96% polyester, 1% wool, and 3% other fibers. Matt Smith fans will want […]

Before Amy Pond traveled through time and space, she was a little girl with an imaginary friend known as the Raggedy Doctor. The Doctor Who 11th Doctor Collectible Doll is a great idea that’s meant to give little Amelia Pond’s make-believe character a physical form. […]

If you want to dress like the Doctor, you’ll need a fez, a bow tie, the jacket and of course these Doctor Who 11th Doctor’s Red Suspenders. Now you look like a proper Timelord. These are the eleventh Doctor’s burgundy suspenders and they come in […]

Anyone who watches Doctor Who knows that bow ties are cool. Fezs are too, but that’s another story. Oh yeah, Stetsons too. This Doctor Who 11th Doctor’s Bow Tie is awesome. It’s just like the one that Matt Smith wears. In fact, it’s an officially licensed […]