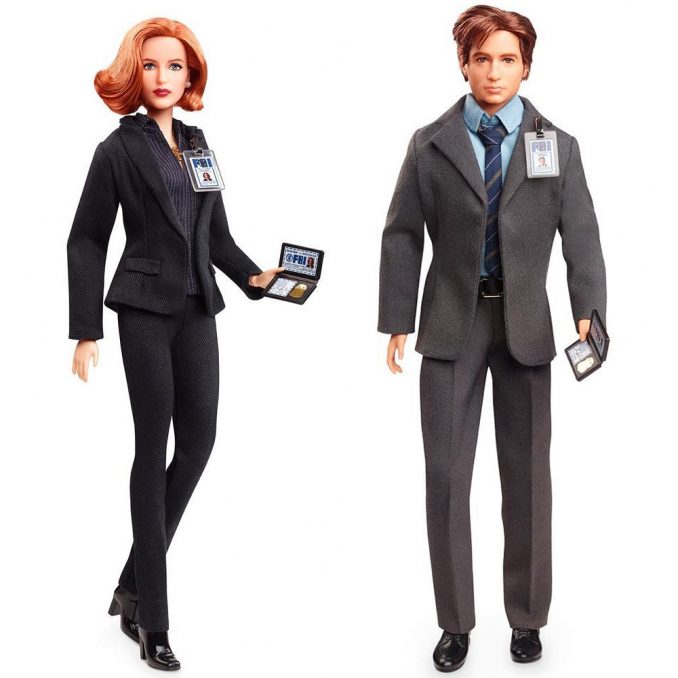 Even if you’ve never considered collecting Barbie Dolls before, you might change your mind when you see these amazing The X-Files Mulder and Scully Barbie Dolls. They are incredibly detailed and life-like down to the hair, clothing, identity tags, and FBI badges.

A worldwide phenomeon, the X-Files has mesmerized audiences since its debut nearly 25 years ago. Celebrate this pop culture phenomenon’s 25th anniversary with Barbie X-Files doll assortment featuring the Barbie Mulder doll and the Barbie Scully doll. The team is back together again and on the case. The truth is out there!

The X-Files Mulder Barbie Doll is available for $49.95 directly from FOX Shop. It is available to pre-order now, with initial shipments expected in just 2 weeks.

Mulder and Scully aren’t the only geek favorites to get the Barbie treatment. Also check out these Barbie Dolls: Wonder Woman, Doctor Who Thirteenth Doctor, Star Trek, Catwoman, and Hunger Games Katniss Everdeen.

Doctor Who and Barbie are both enduring favorites that have stood the test of time. Their collectibles remain popular and valuable, so this Barbie Doctor Who Thirteenth Doctor Collector Doll may be worth a lot some day. Fully posable and sculpted to look just like […]

The DC Trinity has arrived in the world of Barbie with the Batman v Superman: Dawn of Justice Barbie Dolls. There’s no pink cadillac, dream house, or Ken in sight, but these official Barbie dolls do deliver some super awesomeness with Barbie dolls that look […]

Do you believe in aliens? You will when you get the X-Files Pop! Vinyl Figures because Funko has managed to capture one. Many wanted to believe when The X-Files was on TV and now you can join Mulder and Scully as they search for the […]