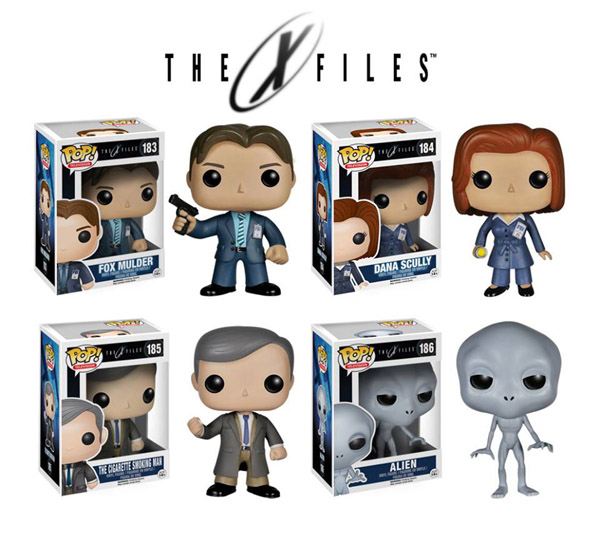 Do you believe in aliens? You will when you get the X-Files Pop! Vinyl Figures because Funko has managed to capture one.

Many wanted to believe when The X-Files was on TV and now you can join Mulder and Scully as they search for the truth while looking adorably cute. Their investigation will undoubtedly lead them to proof of extraterrestrials, as well as a certain man in the shadows who needs to cut back on smoking.

Each figure stands 3 3/4-inches tall. Mulder has his gun at the ready, Scully is discovering secrets with her flashlight, and the Cigarette-Smoking Man is puffing away on a cigarette. The alien is empty-handed because he’s an alien so he can probably just zap you with his mind or something.

The X-Files Pop! Vinyl Figures will be available April 2015 but they can be pre-ordered now for $9.99 each at Entertainment Earth. Choose from Fox Mulder, Dana Scully, the Cigarette-Smoking Man, and the Alien.

X-Files Portrait of a Skeptic T-Shirt

You’ll be a believer with the X-Files Portrait of a Skeptic T-Shirt, ready to search for the truth… which is out there. With flashlight in hand and FBI badge affixed to her lapel, Special Agent Dana Scully is ready to seek the truth with partner […]

Celebrate the return with this X-Files 2016 Select Action Figure Set. With the 6-episode series ready to re-open The X-Files for the world, it’s time we had some awesome action figures based on the TV show. This set features Mulder and Scully in their 2016 […]

X-Files I Want to Believe Journal

This X-Files I Want to Believe Journal is the perfect place to write down all of your conspiracy theories and UFO sightings. It is a hardbound cover debossed with Mulder’s poster. It looks awesome and is perfect for X-Files fans. It has 232 lined pages […]