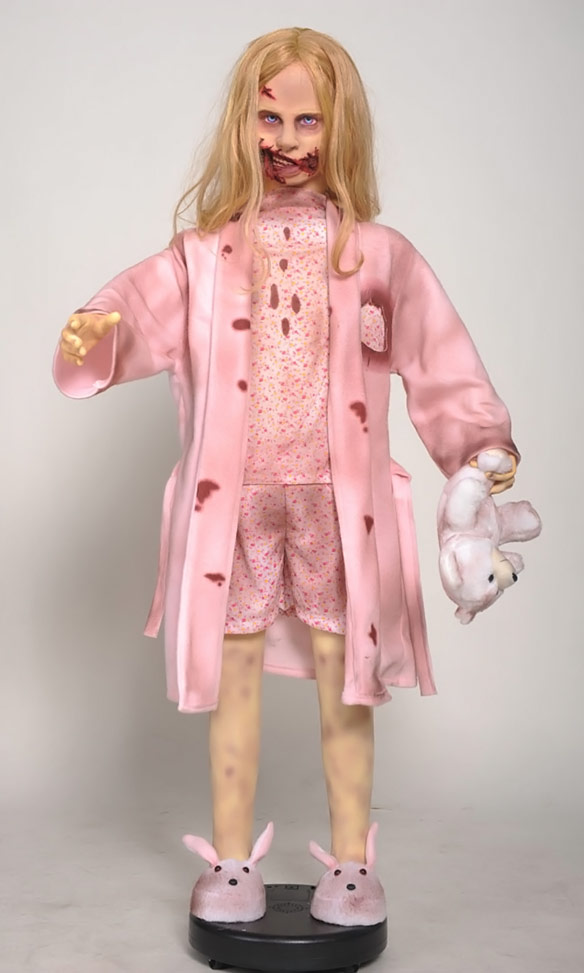 You might not win any Dad-of-the-Year awards if you set up the Walking Dead Teddy Bear Girl Life-Size Statue in your children’s room but there will be no doubt that you deserve a Fan-of-the-Year award because it takes a little bit of courage to bring a real moving zombie into your home.

Is this once-adorable girl a real zombie? No, you’re perfectly safe because it’s just a statue, but the statue does move and snarl, which is sure to bring about a few comical moments (and maybe a couple of bowel-related accidents) in your home.

In case it’s been a while since you re-watched Season One of The Walking Dead, Teddy Bear Girl made her first (and last) appearance on the very first episode of the smash AMC series, gaining almost as much popularity as the iconic Bicycle Girl.

The Walking Dead Teddy Bear Girl Life-Size Statue will be available September 2013, but can be pre-ordered now for $219.99 at Entertainment Earth.

This cute and colorful speaker in the shape of a teddy bear works in the same was as the USB Sheep Speaker – simply hook up your iPod or any other portable audio device using the standard 3.5mm stereo audio jack, and you’re good to […]

Remember that homemade USB drive created from a decapitated teddy bear that was all over the blogs a couple of years ago? Something very similar is now available for purchase through the USB Geek website.

The Smart E Bear lets you connect him to your computer via USB. Then, once you have synced him with the downloadable software, he will start talking to your kid – by name.

Think you’re too old for teddy bears? Think again because the Ted 16-Inch R-Rated Talking Plush Teddy Bear w/ Moving Mouth isn’t your average teddy. As a matter of fact, this foul-mouthed furry imp is almost exactly like the fun-loving bear in the movie… except […]

From behind, the Domo Pink Teddy Bear almost looks just like a regular cuddly teddy bear or plush toy. Turn it and you’ll be greeted with the usual fierce face of Domo being his usual old self. I especially like how the pale pink color […]

Who could forget the pink teddy bear from Breaking Bad. He was a recurring motif in the show. Almost a part of the cast. Now you can have his eye with you always. The Pink Teddy Bear Eye Breaking Bad Keychain has its eye on […]

The Walking Dead Little Girl Art Print captures an iconic moment in the very first episode of AMC’s The Walking Dead, proving that even little children with teddy bears and bunny slippers can be deadly. While Rick had already discovered how screwed up the world […]