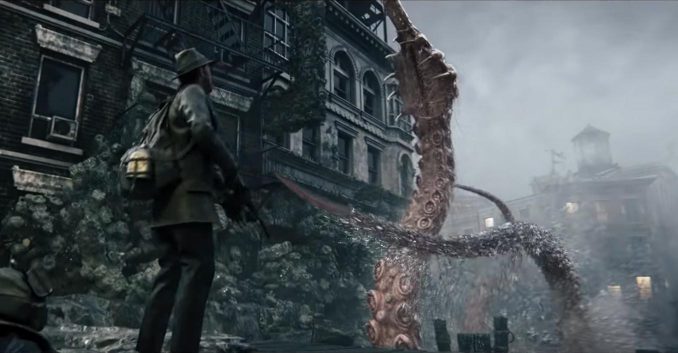 If you like H.P. Lovecraft, and adventure games set in an open world, you need to check out The Sinking City: Death May Die Cinematic Trailer. Even though it looks incredible, you may not have heard of it yet, because it is from a small independent video game studio where they don’t get as much publicity as the major players. However, the name of the game developer, Frogwares, may ring a bell if you’ve played one of their Sherlock Holmes adventure games before.

He believed he’d be able to rip loose the veil clouding his lost memories, and bring to light the horrors hiding inside, biding their time to submerge the world. At least, that’s how he saw things…

Dive into The Sinking City, an adventure and investigation game set in an open world inspired by the universe of H.P. Lovecraft, the master of Horror. The half-submerged city of Oakmont is gripped by supernatural forces. You are a private investigator and you have to uncover the truth of what has possessed the city… and the minds of its inhabitants.

While cinematic trailers are exciting, and a good way to learn about the backstory, nothing compares to watching the game in action. Watch The Sinking City | A Close Shave – Gameplay Trailer from Frogwares:

Tortured by his past and otherworldly visions, Charles W. Reed, a private investigator finds himself in Oakmont, Massachusetts, seeking salvation from the creeping insanity that afflicts him. Once a trade harbor, known for its lucrative smuggling business, Oakmont now lives in secluded isolation from the rest of the world, under a flood of supernatural origins. In this place of decay and superstition; players will have to deal with the dregs of mankind, follow clues they wish they had never found, and unveil a cosmic horror threatening the world itself.

If you missed it before, check out The Sinking City | Teaser Trailer from Frogwares:

Can you hear that voice in your head getting louder and louder? That’s me. This is not the last time we will talk…

Taking place in the 1920s, The Sinking City is a game of adventure and investigation set in an open world inspired by the works of the famous American horror author H.P. Lovecraft.

You will step into the shoes of a private investigator who arrives in the city of Oakmont Massachusetts – a city suffering from unprecedented floods of supernatural origins. You must uncover the source of whatever has taken possession of the city – and the minds of its inhabitants.

Don’t let the YouTube thumbnail fool you, this isn’t a trailer for the Transformers Bumblebee Movie. Instead, it’s for an upcoming BioWare video game, and you’ll want to take a looke because the Anthem Cinematic Trailer Looks Fantastic. Watch the Anthem Official Cinematic Trailer from […]

Although HP Lovecraft’s Cthulhu is a grotesque and malevolent creature, we’ve seen some pretty cute interpretations like the Peeping Cthulhu Plush, Baby Plush, Slippers, and Cell Phone Holder. This Nightmares of Lovecraft Ultra Cthulhu Statue Sculpture is certainly not one of these adorable renditions. In fact, is […]

Season 13 of Supernatural returns to the CW on March 29, with an animated Scooby-Doo episode. Today they released a short Supernatural Scooby-Doo ScoobyNatural Trailer, so you can get a taste. Basically, the Winchester brothers get animated and end up in Scooby-Doo, with The Mystery […]