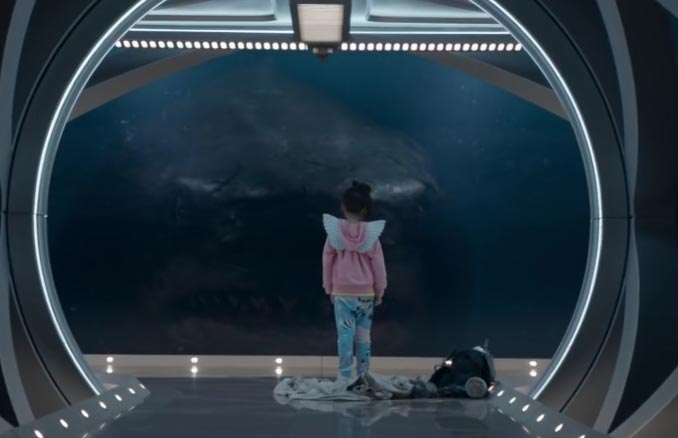 We’ve already seen the Official Trailer and Trailer #2, but the new The Meg “Carnage” Trailer is even more action packed. It’s a 30 second TV spot, so it is much shorter than the other official trailers. They basically trimmed it down to some of the most intense action cuts from the movie.

The Meg hits theaters on August 10, 2018. It stars Jason Statham, Rainn Wilson, Ruby Rose, Li Bingbing, Winston Chao, and Cliff Curtis. It is directed by Jon Turteltaub and based on the novel by Steve Alten.

Five years ago, expert sea diver and Naval Captain Jonas Taylor encountered an unknown danger in the unexplored recesses of the Mariana Trench that forced him to abort his mission and abandon half his crew. Though the tragic incident earned him a dishonorable discharge, what ultimately cost him his career, his marriage and any semblance of honor was his unsupported and incredulous claims of what caused it – an attack on his vessel by a mammoth, 70-foot sea creature, believed to be extinct for more than a million years. But when a submersible lies sunk and disabled at the bottom of the ocean – carrying his ex-wife among the team onboard – he is the one who gets the call. Whether a shot at redemption or a suicide mission, Jonas must confront his fears and risk his own life and the lives of everyone trapped below on a single question: Could the Carcharodon Megalodon – the largest marine predator that ever existed – still be alive … and on the hunt?

Filming on “The Meg” was accomplished on location in China and New Zealand.

While it hasn’t been released by Warner Brothers quite yet, The Meg Trailer #2 has leaked on YouTube and it looks amazing. The leaked version has Chinese subtitles, but the audio is in English. We’ll update this article with the official trailer #2 as soon […]

It seems as if the USB flash drive trend now has gone from food inspired designs to jewelry ones. These wearable storage devices are popping up like mushrooms these days. Jewel Rose Pin USB Flash Drive is fashionable and elegant that you can wear it […]