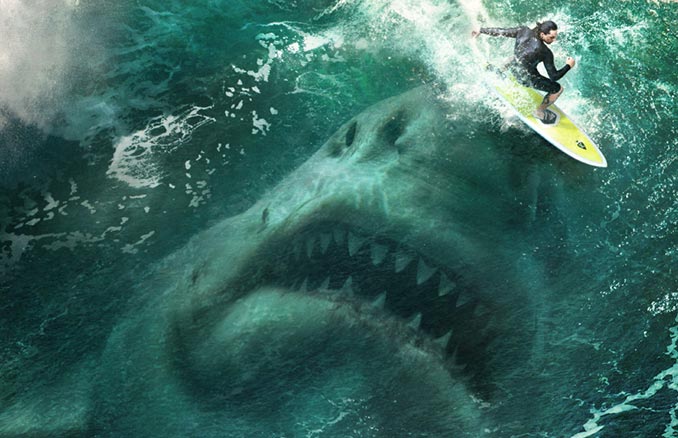 Warner Bros. Pictures released the first The Meg Official Trailer, and it looks intense. The movie, which is slated for released in August, 2018, is a science fiction action thriller about a 75-foot-long shark known as the Megalodon that was previously thought to be extinct. It is based on the New York Times best-selling novel by Steve Alten that was originally published in 1997.

In The Meg, a deep-sea submersible—part of an international undersea observation program—has been attacked by a massive creature, previously thought to be extinct, and now lies disabled at the bottom of the deepest trench in the Pacific…with its crew trapped inside. With time running out, expert deep sea rescue diver Jonas Taylor (Jason Statham) is recruited by a visionary Chinese oceanographer (Winston Chao), against the wishes of his daughter Suyin (Li Bingbing), to save the crew—and the ocean itself—from this unstoppable threat: a pre-historic 75-foot-long shark known as the Megalodon. What no one could have imagined is that, years before, Taylor had encountered this same terrifying creature. Now, teamed with Suyin, he must confront his fears and risk his own life to save everyone trapped below…bringing him face to face once more with the greatest and largest predator of all time.

If you enjoy the occasional cup of tea, chances are you have a favorite tea infuser to steep in your tea. I can’t think of a better tea infuser than the Deep Diver, which makes tea time more fun. When you drop this little guy […]

I’ve gone to my fair share of camping trips back when I was still a kid. The camping part, I liked. The morning after, not so much. Usually we either spent another half day or so before heading back to the city. And since we […]

It can be a drag to get your kids to put on life jackets when they’re out swimming. Of course, they love being in the water but wearing bright orange vests, not very much. Which is why I think the Sea Squirts White Shark Life Jacket […]

I’m not sure what the big deal is about gray sea salt, but I do know that when you combine caramel with a salty element a major party kicks off in the mouth. That’s exactly what will happen when you take a bite of one […]

Designing an enchanted garden is easy when you incorporate the proper mythical creatures into it. Spiff up your home’s curb appeal by adding the Sea Serpent Garden Sculpture to your garden bed. An exclusive item from Uncommon Goods, this sea serpent sculpture is made to look as […]

When there’s something strange in your neighborhood, who ya gonna call? Ghostbusters. Obviously. This Ghostbusters Winston Zeddemore and Ecto-1 Pop! Vinyl Vehicle is exactly what a Ghostbusters fan needs to complete their collection. You get Ecto 1 along with the primary driver of the car […]