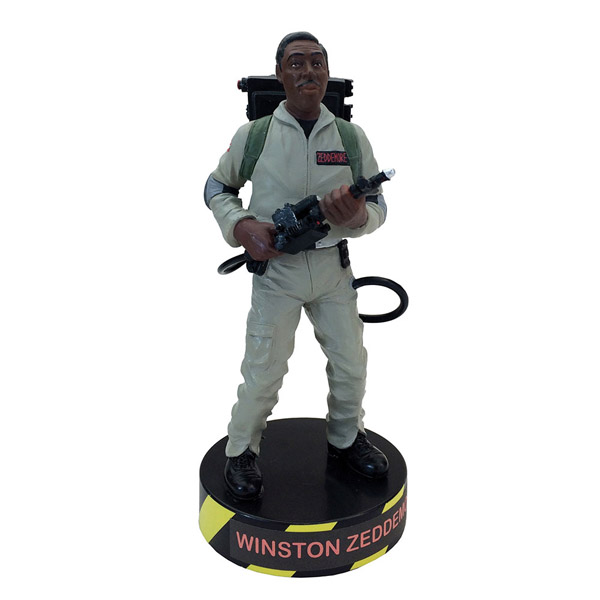 When there’s something strange in your neighborhood, you don’t have to call anybody as long as you have the Ghostbusters Winston Zeddemore Talking Premium Motion Statue because he’ll bust the ghosts for you.

Crafted from heavyweight polystone and standing 7-inches tall, this statue features Winston Zeddemore AKA the most under-used Ghostbuster in the franchise. Dressed in his iconic Ghostbuster uniform, complete with an unlicensed nuclear accelerator on his back, Winston has a manually operated motion feature at the waist and says 4 audio phrases from the movie… which probably comes close to covering every word poor Winston got to say in the film.

The Ghostbusters Winston Zeddemore Talking Premium Motion Statue will be available October 2016 but it can be pre-ordered now for $39.99 at Entertainment Earth.

When there’s something strange in your neighborhood, who ya gonna call? Ghostbusters. Obviously. This Ghostbusters Winston Zeddemore and Ecto-1 Pop! Vinyl Vehicle is exactly what a Ghostbusters fan needs to complete their collection. You get Ecto 1 along with the primary driver of the car […]

A popular movie quote gets a gender twist on the Ghostbuster Goddess T-Shirt, with a female Ghostbuster ready to kick some paranormal butt. There are plenty of great scenes in the original Ghostbusters movie, with one of the favorites being when Winston declares, “Ray, when […]

If you love car window stickers and already have your vehicle covered in Zombies, Guns or Star Wars decals, why not add the Ghostbusters Family Car Window Decal to the mix. Sure Venkman, Stantz, Spengler, and Zeddemore might not be your real family, but wouldn’t […]