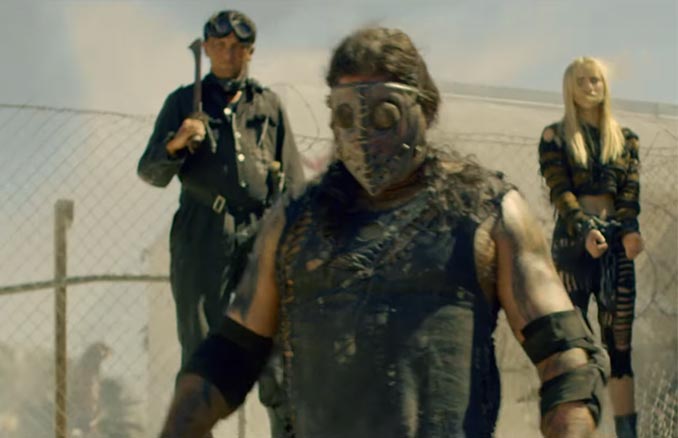 Fans of post-apocalyptic movies along the lines of Mad Max will want to check out the new Future World Official Trailer from Lionsgate. This movie stars James Franco, Suki Waterhouse, Milla Jovovich, Lucy Liu, and Snoop Dogg. Future World will be released in theaters, on demand, and on iTunes on May 25, 2018. This is the same day that Solo: A Star Wars Story hits theaters in the US, so this movie probably won’t get much attention, especially because it appears to be very low budget.

In a post-apocalyptic world, where water and gasoline have long since dried-up, a prince from the oasis (one of the last known safe-havens) must venture out to find medicine for the ailing queen (Lucy Liu), but along the way he gets mixed up with the warlord (James Franco) and his robot Ash (Suki Waterhouse), which leads to a daring journey through the desolate wastelands.

Man’s best friend helps you survive the Wasteland on the Fallout Post-Apocalyptic Pal T-Shirt. With feral ghouls, super mutants, and just generally rotten people wandering around the ruined wasteland of the future, it’s nice to have a friend you can count on, and nobody had […]

Terminator meets classic Planet of the Apes on The Future After The Future Art Print, featuring a future where humans are even more screwed than before. Humanity fell and then the apes took over… and then they created Skynet, which eventually took over the entire […]

Back to the Future iPad Case

In Back to the Future 2, an innocent-looking book caused a lot of trouble, allowing history to be completely rewritten. The Back to the Future iPad Case bridges the gap between fiction and reality, although history probably won’t be in any danger. BTTF fans will […]

The Desert Oasis Double Bubble Terrarium is awesome. think of it as a desert right on your desk. It is a great way to grow your own aloe too. You get over 15 different types of cacti included. It will be a nice relaxing desk […]

Back to the Future Day T-Shirt

Celebrate the moment the future becomes the present with the Back to the Future Day T-Shirt. Great scott! It took longer for us than it did for Marty McFly and Doc Brown but we did it. We traveled to the future. In Back to the […]

Back to the Future Heat Changing Mug

This Back to the Future Heat Changing Mug is from the future. Or maybe the past. Fans of the Back To The Future trilogy are going to love this mug. The time circuits appear when mug gets hot. Now your morning coffee may send you […]

Back to the Future 2 Hover DeLorean Electronic Vehicle

The Back to the Future 2 Hover DeLorean Electronic Vehicle is going to look great on your shelf. The gull wing doors open and the hover wheels are adjustable. Just press a button to enjoy time travel lights and sounds. The light-up parts include time-coils, […]