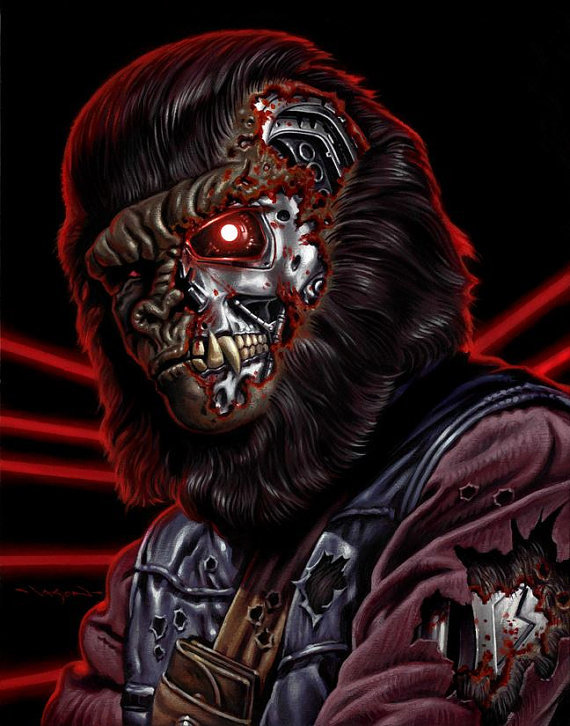 Terminator meets classic Planet of the Apes on The Future After The Future Art Print, featuring a future where humans are even more screwed than before.

Humanity fell and then the apes took over… and then they created Skynet, which eventually took over the entire world with an army of Terminator Apes.

Would apes join forces with humans if a common enemy threatened both races? Would humans even stand a chance or would they all be illiterate savages? Artist Jason Edmiston envisions a mash-up of two epic franchises with a 13-inch by 17-inch giclee print that shows a battle-damaged Terminator Ape. I’d love to see a movie like this, especially if the Terminator Ape says “I’ll be back, you damned dirty human.”

The print is signed, numbered, and limited to just 100 pieces.

This Terminator 2 – 7″ Ultimate Edition Action Figure bears Arnold’s likeness and has over 25 points of articulation. It also features 3 interchangeable heads (regular, sunglasses, and battle-damaged). When it comes to ammo, this Terminator is packing some heat. He comes with a minigun, […]

Someone has turned the shiny Cyberdyne Systems Terminator robot into a DVD player.

It was designed to do one thing – look awesome on your wall, and by ‘it,’ I mean the Terminator Cyberdyne Systems Model 101 Art Print. You didn’t think I was talking about an actual Terminator, did you? Heck, that was just designed to kill […]

Cyberdyne is responsible for unleashing the robot apocalypse in the world of the Terminator movies. If you are a fan, then this Terminator 2: Cyberdyne Logo Coffee Mug is for you. You might as well drink up in style while you wait for Skynet to […]