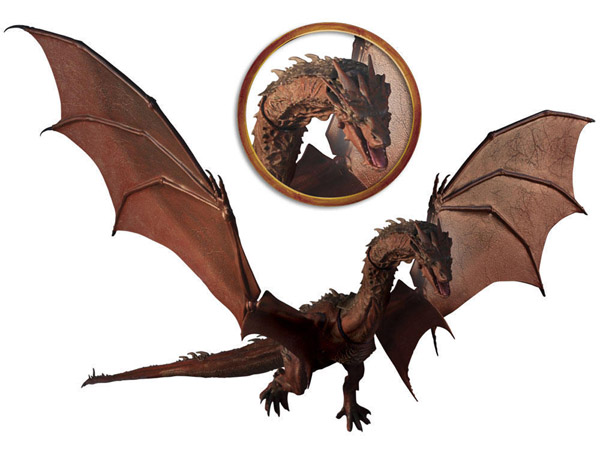 Straight out of Middle-Earth and into your home flies The Hobbit: The Battle of the Five Armies Smaug Large-Scale Poseable Action Figure.

With an eye-catching 22-inch wingspan, this highly-detailed action figure measures 21 inches in length, features 10 points of articulation, and includes wingtips and a tail with wire cores that allow for extra variety in posing. The figure even comes with a little Bard the Bowman… although poor Bard really isn’t that impressive here.

Smaug has a limited edition production run of 3000 units, and each box will be labeled with a gold sticker indicating the number.

The Hobbit: The Battle of the Five Armies Smaug Large-Scale Poseable Action Figure will be available December 9, 2014 but it can be pre-ordered now for $69.95 at the WBShop.

The Hobbit Battle of the Five Armies Smaug Pop! Figure

The Hobbit The Battle of the Five Armies Smaug Dragon 6-Inch Pop! Vinyl Figure stares at you with accusing eyes, but which set of eyes will you see as he examines you? Most Pop! Vinyl figures stand 3 3/4-inches-tall but the mighty Smaug towers over […]

If you aren’t born a Hobbit, you can’t have Hobbit feet. Or can you? These Hobbit Feet Socks make it possible, without having to be born in the Shire. You will have instant hairy Hobbit feet since these toe socks have Hobbit hair. They are […]