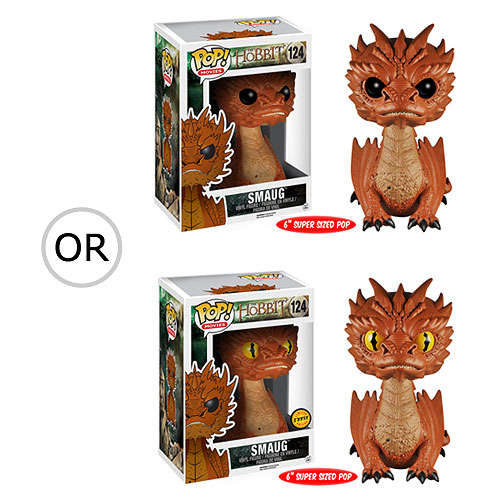 The Hobbit The Battle of the Five Armies Smaug Dragon 6-Inch Pop! Vinyl Figure stares at you with accusing eyes, but which set of eyes will you see as he examines you?

Most Pop! Vinyl figures stand 3 3/4-inches-tall but the mighty Smaug towers over them all, standing an impressive 6-inches tall. Even more impressive is the fact that the fearsome dragon from “The Desolation of Smaug” and “The Battle of the Five Armies” might surprise you upon his arrival. The regular figure has black eyes (as black as his soul) but a variant is inserted throughout the production run so you might be the recipient of a Smaug with golden eyes (as gold as the wealth he covets and hoards).

The Hobbit The Battle of the Five Armies Smaug Dragon 6-Inch Pop! Vinyl Figure will be available November 2014 but it can be pre-ordered now for $14.99 at Entertainment Earth.

Straight out of Middle-Earth and into your home flies The Hobbit: The Battle of the Five Armies Smaug Large-Scale Poseable Action Figure. With an eye-catching 22-inch wingspan, this highly-detailed action figure measures 21 inches in length, features 10 points of articulation, and includes wingtips and […]