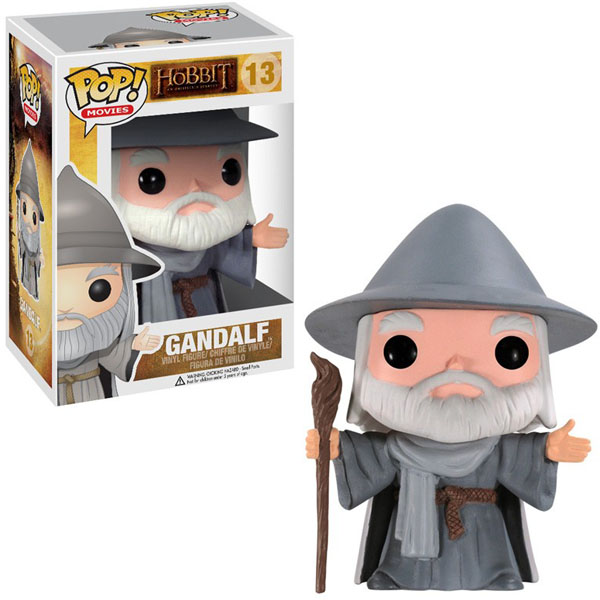 Gandalf is the wisest, noblest, most kick-ass wizard of Middle-earth, and it won’t be long until we get to see the fabulous Ian McKellen star as Gandalf again on the big screen. In the meantime, it’s time to get busy collecting LOTR/Hobbit stuff like The Hobbit Gandalf Pop! Vinyl Figure.

There’s no mistake that this Pop! figure represents Gandalf. He has his staff, white beard, grey robe, scarf, and matching hat, and his serious expression makes one think that he’s about to tap into his magical vault. You might want to get out of his way.

You can find the Gandalf Pop! Vinyl Figure at Entertainment Earth, NeatoShop and Amazon.com for around $10.

Other exciting items that have popped up in the Shire include new LEGO Hobbit Sets and Plush Halfling Slippers.

If you’re a fan of J. R. R. Tolkien’s Hobbit and Lord of the Rings fantasy novels, then you know there’s nothing like having a faithful hobbit on your side. Sure they were ridiculed by many, even called halflings, but that doesn’t mean they can’t […]

Imagine this. A piece of paper on your desk feels a breeze and tries to take off to parts unknown, only to be halted by the Hobbit Gandalf Paperweight shouting defiantly, “You shall not pass!” Sure, I know that reference is from the other set […]

Glamdring – The Sword Of Gandalf

Here is a replica of Glamdring – The Sword Of Gandalf in all of its shining glory. Hobbit fans will want to hang this one on the wall of their Hobbit Hole and admire it every day. It features solid metal hilt parts, faux blue […]

Wizards have a pretty sweet life because they can use magic to make the simplest things seems awesome. Take the Gandalf The Grey Illuminating Staff, for example. In the hands of any other old geezer, it would just be a walking stick; nothing but a […]

Relive the epic battle of Gandalf vs. Saruman with these awesome Lord of the Rings Gandalf and Saruman Salt and Pepper Shakers. Choose a side. Salt or pepper. Then it is time to do battle with your food. This pair of salt and pepper shakers […]

Wasn’t Bilbo Baggins’ house the coolest ever? He was probably the founding father of the term “man cave.” If you’re a big fan of “The Lord of the Rings” and Hobbit architecture, then you probably won’t be able to rest until you have the Bookshelf Hobbit Door. Whatever lies behind this […]

If you aren’t born a Hobbit, you can’t have Hobbit feet. Or can you? These Hobbit Feet Socks make it possible, without having to be born in the Shire. You will have instant hairy Hobbit feet since these toe socks have Hobbit hair. They are […]