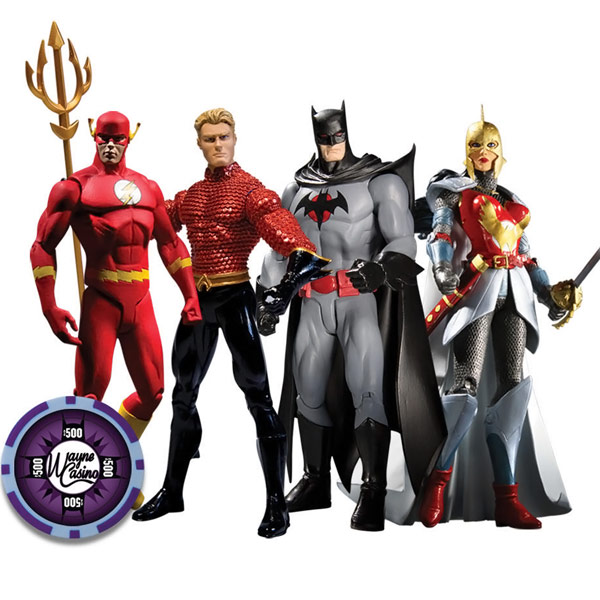 Some familiar faces aren’t as familiar as you might think with the Flash Exclusive Flashpoint Action Figures Box Set because this is where everything started to change in the universe of DC Comics, and you can now own these groundbreaking characters.

Think you know what makes these iconic heroes tick? Unless you’re a comics geek, I’d have to say your guesses are wrong because these are the ‘heroes’ of Flashpoint, the universe-changing series that led to DC’s New 52, which also happen to have their own set of action figures in the Justice League New 52 Box Set Action Figure 7-Pack.

In the world of Flashpoint, only the Flash is the actual hero that everyone is familiar with. Aquaman and a severely over-dressed Wonder Woman are at war with each other, and the man behind the Bat-mask is Thomas Wayne, whose young son, Bruce, was gunned down when he just a kid.

Along with the familiar-yet-not characters of the Flashpoint world, this box set also contains an exclusive $500 Wayne Casino Poker Chip. Spend it wisely… if you can find a casino around here that’s owned by Thomas Wayne.

The Flash Exclusive Flashpoint Action Figures Box Set is regularly $59.95 but you can get it now for $19.99 at WBShop.com.

Any fan of card games and gambling is going to up the ante to get this handsome Casino Placemat and Coaster Set. The best type of tableware sets are those that don’t exactly match but have one central theme in common. They are more visually interesting, […]

In 2011, DC Comics revamped their iconic heroes with a ‘New 52’ redesign, but as the DC Comics New 52 Earth 2 Action Figures show, they didn’t just change the heroes of one world; they tackled two. These 6.75-inch action figures show a few familiar […]