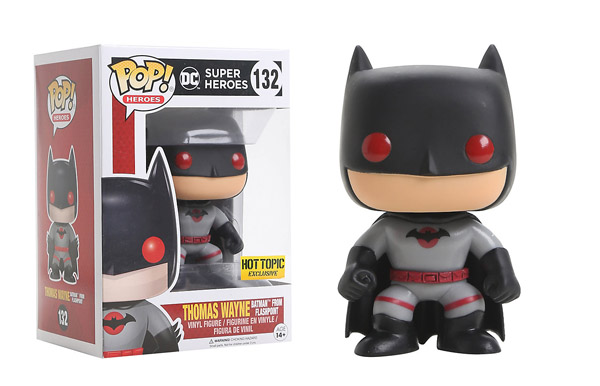 You can’t really tell by looking at the Pop! Heroes Thomas Wayne Batman From Flashpoint Vinyl Figure but this is a hardcore Dark Knight that make’s Bruce Wayne’s Caped Crusader look like a fluffy bunny.

When a selfish Scarlet Speedster altered the timeline to save his mother, he created the Flashpoint Universe, an alternate reality where Bruce Wayne was killed as a child and his father, Thomas, became Batman. And this Batman doesn’t believe in taking it easy. It’s not entirely his fault, though. When your son is dead and your wife is the Joker, you’re allowed to be a little grumpy.

Standing 3 3/4-inches tall, the figure is dressed in the Flashpoint Batman’s gray, black, and red.

The Pop! Heroes Thomas Wayne Batman From Flashpoint Vinyl Figure is available for $12.50 at Hot Topic.

Some familiar faces aren’t as familiar as you might think with the Flash Exclusive Flashpoint Action Figures Box Set because this is where everything started to change in the universe of DC Comics, and you can now own these groundbreaking characters. Think you know what […]