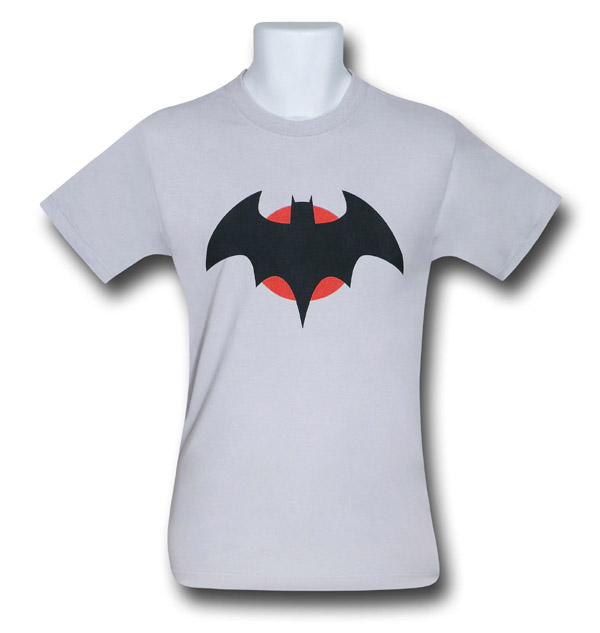 The Flashpoint Batman Thomas Wayne Symbol T-Shirt lets you be the only guy capable of being an angrier Batman than Bruce Wayne, and he has a devastating secret that not even Bruce could handle.

In the Flashpoint story arc, the DC universe is altered, with little Bruce dying in the alley and Daddy Wayne becoming Batman to clean up the streets of Gotham, using the money from Wayne Casinos to fund his vigilante activities. Too bad Bruce’s mom had an even rougher time dealing with the death of her son, saying goodbye to sanity and becoming the Joker. Ultimately, Thomas showed he was a true hero when he was willing to sacrifice himself to help restore the timeline that allowed his son to live.

You can get the Flashpoint Batman Thomas Wayne Symbol T-Shirt for $21.99 – $25.99 at SuperHeroStuff.com.

Some familiar faces aren’t as familiar as you might think with the Flash Exclusive Flashpoint Action Figures Box Set because this is where everything started to change in the universe of DC Comics, and you can now own these groundbreaking characters. Think you know what […]

Batman has a great outfit, kick-butt transportation, and tons of bat-goodies, but the Batman Makin’ It Wayne T-Shirt shows the number one tool at Batman’s disposal; the one thing that makes the existence of the Dark Knight possible. Batman is appealing to so many people […]

The president of Wayne Enterprises has his eye on bigger things so show your support for the Gotham City billionaire industrialist with the Bruce Wayne for President T-Shirt. He was born to a wealthy family so you might not think Bruce Wayne knows anything about […]

Batman reveals his super power on the Batman Make it Wayne T-Shirt. The Man of Steel has the advantage of being from another planet. Princess Diana has all the perks of being an Amazon warrior. But Bruce Wayne is just a regular guy from Gotham […]

Let your mat do the talking with the Hello Goodbye Doormat. Hellogoodbye is actually also the name of this power pop band that I really like, so this doormat gets full five stars right off the bat. When someone hears the word doormat, they could […]

The Dark Knight gets stylish with the Batman Bat Crest Symbol T-Shirt, blending the Bat with Baroque for an eye-catching design. This black, 100% cotton tee features the iconic Batman logo in the midst of ornamental baroque lines and fancy flourishes, which seem a little […]