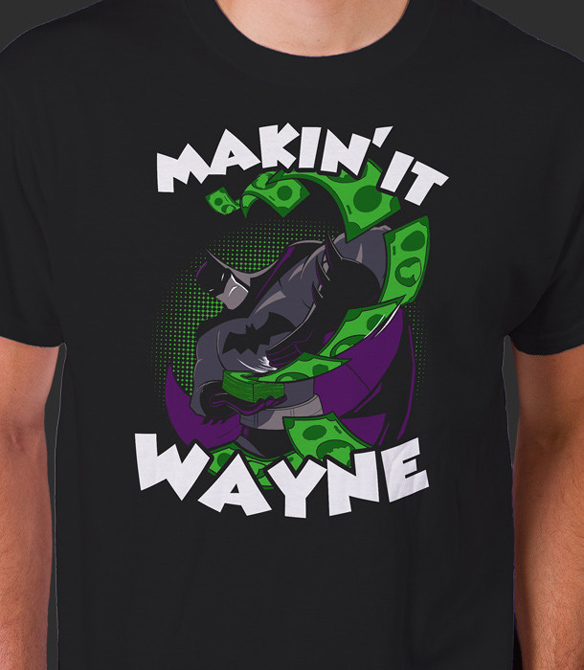 Batman has a great outfit, kick-butt transportation, and tons of bat-goodies, but the Batman Makin’ It Wayne T-Shirt shows the number one tool at Batman’s disposal; the one thing that makes the existence of the Dark Knight possible.

Batman is appealing to so many people because it’s easy to picture a normal person (meaning you) under the cowl. You don’t need to be rocketed to Earth from another planet or given a power ring by a dying alien. You just need dedication… and lots of cold hard cash. It’s that last part that keeps the streets from being overrun by thousands of Batman imitators.

Two-Face squirt acid on the Bat-suit? Joker blow up the Batmobile? No problem; just throw money at the problem and it goes away. Ultimately, Batman’s greatest weapon is Bruce Wayne’s credit card. 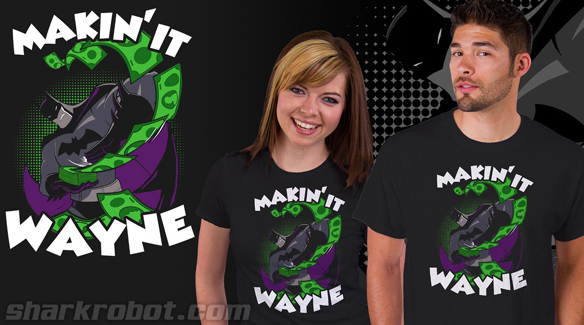 The Batman Makin’ It Wayne T-Shirt is available for $19.95 at Shark Robot. (Update: Link removed because the page is gone.)

Hope your sweet tooth is ready for a treat because Ray, Peter, Egon, and Winston are getting ready to serve a tasty dessert on the Ghostbusters Makin’ Smores T-Shirt. Mr. Stay-Puft has met his match as the Ghostbusters unleash the power of their proton packs, […]

Bacon is so delicious and amazing that you wish everything could involve bacon. Well, we can’t have bacon everything, but you can play a neat dice game that involves bacon. The Makin’ Bacon Dice Game will be fun for the whole bacon loving family. Anything […]

Whether you are writing a long essay or taking a test, sometimes you just want to take a break and have some fun. The Squirt Gun Pen is perfect. Just stop your writing and squirt somebody.