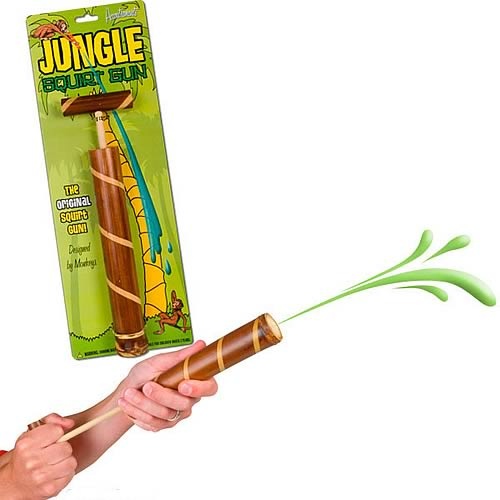 You might not be like George of the Jungle who obviously lives in the jungle, but you can still pick fights with the Jungle Squirt Gun. This is unlike most typical water guns, because it’s not a gun in the first place. Instead, it sort of looks like a bamboo tube with a lever that you’re supposed to pull to squirt the water out.

I don’t think you’ll be able to win any water fights with the Jungle Squirt Gun, especially if you’re up against someone with an  Xploderz XBlaster 200. However, you might stand a chance if your opponent is only fighting back with one of these Squirt Gun Pens.

Long before the Super Soaker doused its first victim, monkeys were using primitive squirt guns for hilarious hijinks in the jungle. This 10-inches long bamboo device is a replica of those first crude squirt guns designed by monkeys.

The Jungle Squirt Gun is available in October from Entertainment Earth for $7.99.

Whether you are writing a long essay or taking a test, sometimes you just want to take a break and have some fun. The Squirt Gun Pen is perfect. Just stop your writing and squirt somebody.

So the Two-Way Trick Squirt Camera isn’t a very realistic looking camera, so once you’ve positioned your would-be victims, I suggest you push down the shutter as quickly as you can before they begin to get suspicious. And once you do “take their picture”, it’s […]

Kids love both gum and and toy guns, so when you combine both into a fun new toy you have a winner. The Bubble Blaster Gumball Filled Squirt Gun should give them hours of fun between all of the chewing and shooting.

Do the kids need a cool way to cool off this summer? Skip spending the big bucks to go to an expensive water part and take a trip to your back yard instead because the 18-Foot Splashing Soaker Slide provides plenty of wet fun for […]

Fans of wooden gadgets like the Carbon Neutral USB Flash Drive and the iPod Mini Speaker can now lay their hands of this USB bamboo keyboard and mouse.

Eat your heart out, Tarzan, because the Women of Dynamite Jungle Girl Statue is ready to swing onto the scene. Jana Sky-Born is Jungle Girl, doing what she can to survive on an island populated by dinosaurs, cavemen, and other creatures that make lions, tigers, […]