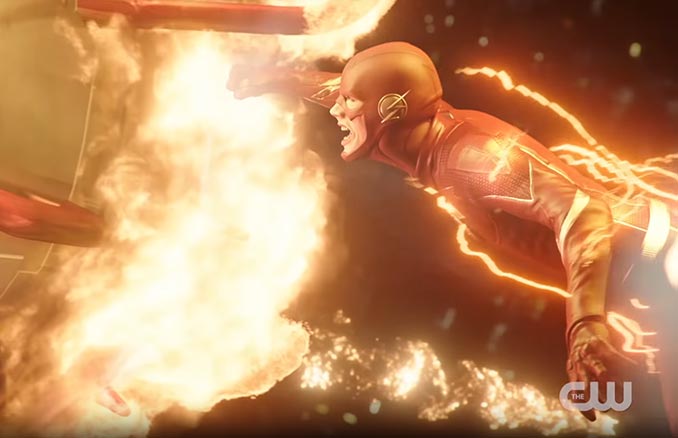 Season 5 will premiere Tuesday, October 9, 2018 on The CW and you can preview it with The Flash Comic-Con 2018 Trailer. A big story arc for the season is dealing with the consequences of time-traveling Nora (future daughter of Barry Allen / Flash and Iris West).

Watch The Flash Comic-Con 2018 Trailer from The CW Television Network:

Based on characters from DC’s The Flash. After the S.T.A.R. Labs Particle Accelerator explosion, a dark matter lightning storm strikes Central City C.S.I. Barry Allen, bestowing him with super-human speed. For now, only a few close friends and associates know that Barry is literally the fastest man alive, but it won’t be long before the world learns that Barry Allen has become…The Flash.

Flash this Central City Police Badge (Flash TV Series) and be just like Barry Allen from The Flash TV series. This 1:1 scale reproduction of the actual prop reads “CENTRAL CITY POLICE DETECTIVE 5936”. It is just what you need to perfect for your CCPD […]

Some stores are now taking pre-orders for the regular version, but you can get the limited edition Alien Facehugger Free Hugs Q-Fig Comic-Con Exclusive now. This is the “Glow-in-the-Dark Slime Edition,” which is a limited edition of 600 units that QMx was selling at their […]