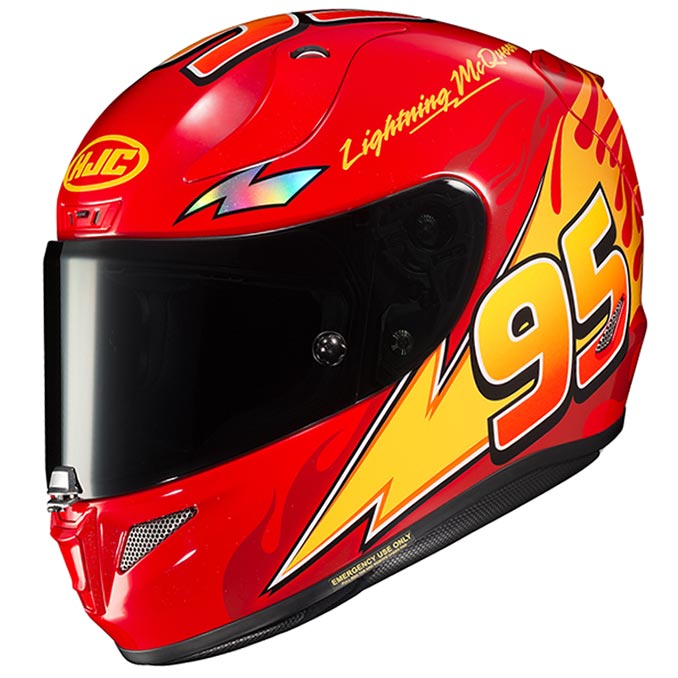 While there are many other awesome characters designed into motorcycle helmets, like Boba Fett, Iron Man, Black Panther, Spider-Man, and Venom, none of them ever won the Piston Cup! Lightning McQueen won it 7 times, and you can show your racing cred with this Lightning McQueen Motorcycle Helmet.

This HJC RPHA 11 Pro Lightning McQueen Helmet is a top-of-the-line motorcycle helmet for sport and track-day enthusiasts with Disney-Pixar style. It features Lightning McQueen bold graphics, such as the bright red color, fiery lightning bolts, and number 95. It also has the logo for his sponsor, Rust-eze, on the back.

Ka-CHOW!! With all the Lightning McQueen livery, including fiery lightning bolts, bold 95 graphics and even Rust-eze sponsor logos, the HJC Lightning McQueen Helmet does your favorite Disney-Pixar racer justice. And because it’s only fitting that a Lightning McQueen helmet be fully race-ready, HJC put this awesome graphic on their top-of-the-line RPHA 11 PRO track helmet.

Like the Iron Man Helmet, this Boba Fett Motorcycle Helmet is also a real helmet based on the HJC RPHA 11 Pro. This means that you the awesome Boba Fett looks, without compromising on safety, comfort, visibility, or quality. This helmet looks really cool too, […]

One of the things that make this Kylo Ren Motorcycle Helmet so awesome is that it is an amazing design even if you’ve never seen the recent Star Wars movies. Let’s face it, Kylo Ren is much less iconic than Spider-Man or Iron Man. By […]

Riding on a motorcycle has always looked cool, but now you can do it superhero style with this Spider-Man Motorcycle Helmet. (Unless, Boba Fett, Iron Man, or Halo Master Chief are more your style.) This Spider-Man motorcycle helmet is based on the HJC RPHA 11 […]

You don’t have to be Robert Downey Jr. to look like a superhero when you wear this Iron Man Motorcycle Helmet. It is designed to look like the Mark 47 Iron Man suit from the movie Spider-Man: Homecoming. This isn’t some aftermarket modification or anything […]

This USB aroma humidifier, designed to look like a motorcycle helmet, will help you increase the humidity in a room and it can also be used as a fragrance oil burner for aromatherapy. Features: Motorcycle helmet shape design humidifier Relieve your breath, eyes, month, throat […]